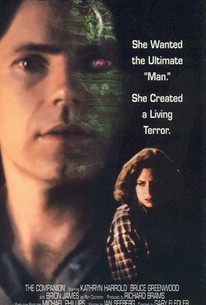 A computer with a mind of its own is the subject of this made-for-television thriller. Set sometime in the future, the film tells the story of a female writer who goes to a secluded cabin to work. She decides to take a programmable male android with her for company. She changes his programming to suit her specific needs but gets more than she bargained for when the android gets his own ideas on what she wants.

Critic Reviews for The Companion

There are no critic reviews yet for The Companion. Keep checking Rotten Tomatoes for updates!

There are no featured reviews for The Companion at this time.