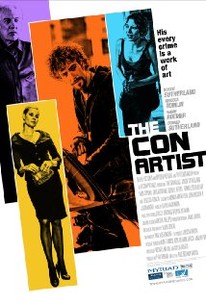 A notorious car thief endeavors to reinvent himself as an emerging artist after being paroled from prison, only to find that his former handler isn't willing to let him go without a fight. Vince (Rossif Sutherland) did the crime, and served his time. Now that he's a free man again, he wants to become a sculptor. When Vince's unusual metal sculptures catch the attention of sophisticated art dealer Belinda (Rebecca Romijn), the former bandit takes the art world by storm. Meanwhile, Vince's former boss Kranski (Donald Sutheland) vows to do everything in his power to get his best operative back to work -- even if it means playing dirty.

Critic Reviews for The Con Artist

There are no critic reviews yet for The Con Artist. Keep checking Rotten Tomatoes for updates!

Audience Reviews for The Con Artist

There are no featured audience reviews yet. Click the link below to see what others say about The Con Artist!