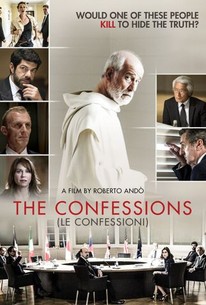 Wonder Woman's Connie Nielsen stars in Award-winning director Roberto Andò's "refreshing suspense thriller" (The Iris) The Confessions, premiering in US theaters this July from Uncork'd Entertainment. Toni Servillo (Gomorrah), Daniel Auteuil (Jean de Florette), and Lambert Wilson (The Matrix Reloaded) co-star in a uniquely metaphysical whodunit, screening nationwide from July 7. A G8 meeting is being held at a luxury hotel on the German coast. The world's most powerful economists are gathered to enact important provisions that will deeply influence the world economy. One of the guests is a mysterious Italian monk, invited by Daniel Roché, the director of the International Monetary Fund. He wants the monk to receive his confession, that night, in secret. The next morning, Roché is found dead...

Critic Reviews for The Confessions

Those expecting the brand of hefty satire found in Andò's last film, Long Live Liberty, will have to wait.

The film's strongest suit is its elegant photography and confident mounting, but these virtues do little to offset the script's pervasive weaknesses.

Andò's film feels entirely manufactured, distancing itself from its audience and blunting its points in the process.

Director Roberto Andò takes the form of a classical whodunit and bludgeons it with naïve indignation and sanctimony.

By the end, the film itself becomes only philosophy and metaphor, the latter happening in a strangely mystical way that feels empty and confusing.

A film with aspect of thriller and aroma of drama where the tone of the story never comes to outshine anyone. [Full review in Spanish]

A tense film supported by a good cast and that aims to dialogue about the complex contemporary geopolitical situation. [Full review in Spanish]

The Confessions flows at a steady pace, avoiding abrupt frenzied spins beyond an unfathomable surreal finale that is worthy of the best illusionists.

There are no featured reviews for The Confessions at this time.