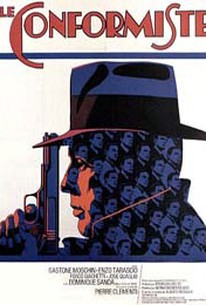 Critics Consensus: A commentary on fascism and beauty alike, Bernardo Bertolucci's The Conformist is acclaimed for its sumptuous visuals and extravagant, artful cinematography.

Critics Consensus: A commentary on fascism and beauty alike, Bernardo Bertolucci's The Conformist is acclaimed for its sumptuous visuals and extravagant, artful cinematography.

Critic Consensus: A commentary on fascism and beauty alike, Bernardo Bertolucci's The Conformist is acclaimed for its sumptuous visuals and extravagant, artful cinematography.

The conformist is 1930s Italian Marcello Clerici (Jean-Louis Trintignant), a coward who has spent his life accommodating others so that he can "belong." Marcello agrees to kill a political refugee, on orders from the Fascist government, even though the victim-to-be is his college mentor. The film is a character study of the kind of person who willingly "conforms" to the ideological fashions of his day. In this case, director Bernardo Bertolucci suggests that Marcello's desire to conform is rooted in his latent homosexuality. In addition to its strong storyline, the film is critically revered for the astonishing production design by Nedo Azzini, which, together with Vittorio Storaro's camerawork, recreates the atmosphere of Fascist Italy with some of the most complex visual compositions ever seen on film, filled with highly stylized uses of angles, shapes, and shadows. The Conformist was cut by five crucial minutes when first released in the US; those missing moments were restored in the 1994 reissue. ~ Hal Erickson, Rovi

Fosco Giachetti
as The Colonel

Benedetto Benedetti
as The Minister

Pasquale Fortunato
as Marcello as a child

Carlo Gaddi
as Hired Killer No. 1

Franco Pellerani
as Hired Killer No. 2

Claudio Cappelli
as Hired Killer No. 3

Umberto Silvestri
as Hired Killer No. 4

Christian Bélègue
as Gypsy
View All

Critic Reviews for The Conformist

It's easy to overlook how stark The Conformist's political and allegorical message is because it's just so damn beautiful.

It's yesteryear remembered with a combination of nostalgia and repulsion, a queasy combination that defines the film and gives it a kind of hideous allure.

The unsettling blend of images and ideas in this movie cannot satisfactorily be disentangled or decoded, and it's the very strangeness of Bertolucci's masterpiece that has made it so influential in cinema history.

Bertolucci's boldest and most expressive film ...

Photographed by Vittorio Storraro, it's a mélange of the sensual haziness of '70s European art-house fair and the high-contrast, anxious angles of film noir

The Conformist is celebrated for cinematographer Vittorio Storaro's tumbling autumn leaves, but its emotional impact involves a tumbling soul.

Bertolucci must now be considered one of the most distinctive creators with film.

The Conformist is a beautiful and provocative film, and its theme could not be more timely.

As a piece of storytelling, The Conformist is engaging and enigmatic; as a succession of images, it's a masterpiece with jaw-dropping grandeur.

Its importance is that it uncomfortably relates the causes of political involvement (that cliché again) and the cost of such involvement...

... heightened, exaggerated, distorted, the world reimagined by the filmmakers as something familiar yet not. It is magnificent ...

The one and only quintessential all-time masterpiece that trades, extensively, on its ideal viewer's knowledge of the history of 20th Century interior design.

Audience Reviews for The Conformist

A different kind of movie about fascism than we're used to in the 2000s--one that makes little use of the jackboots and black uniforms and waving banners that have become almost cartoony fetishizations--The Conformist is in many ways the simple story of a man who takes a job. It's subtle and understated and chilling, a human story in an inhuman time that unfolds slowly, almost like a detective novel. It's rich in every shot and impossible to look away from. An absolute must-see.

A fine movie, but dry and difficult to relate to. I can't imagine many people calling this a favorite. I have a great deal of respect for its craftsmanship, above all, most notably because the filming is beyond gorgeous. Vittorio Storaro, cinematographer extraordinaire and thrice-over Oscar winner, creates a film that looks insular and harsh even when the environment itself is enticing. A jovial dance scene turns into a cruel, claustrophobic show of mockery for our main character; a beautiful snow-covered forest becomes a scene of carnage and despair. The film is bleak and mundane, probably in keeping with its Fascist parallels, which strengthens the thematic link to its detached protagonist Marcello. He's unusual for his primary goal, which is to assimilate into the rest of Italian society and be completely forgotten. Along the way he somehow determines that the best way to do this is to become a low-grade Mussolini hitman, subsequently tasked with putting together a hit on his old college professor. Marcello becomes stranger still when you take his back story into consideration - he was molested as a child, a likely cause of his burning desire to be normal, and creating an unusual sexual ambiguity that adds weight to the ending. His loyal, oblivious wife was also taken advantage of by a much older man, and it's at this point you realize that the fact that they're both card-carrying Fascists is no coincidence. The notion of wanting to find your identity by shedding it completely is somewhat unnerving, and clearly the film's strength, because what still stands as a strong theme now must have been revolutionary in 1970. It's a little easy to kick the dead Fascist horse forty years after the fact, but so be it.

A visually stunning, subjective, psychological study of one man's pursuit of 'normalcy.' The plot is non-linear and revealed through a multilayered series of flashbacks. The portrait is rich with scenes of entrapment, Freudian undertones, and homosexuality. Dominique Sarda sizzles as the lesbian wife of the professor. The cinemetography is masterful. This is a film that withstands, and may require, repeated viewings to absorb its complexities.