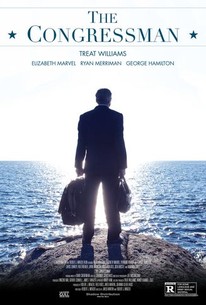 Maine Congressman Charlie Winship has had a bad day. After being caught on video failing to stand and recite the pledge of allegiance with the other members, he punches out another colleague, is confronted by his angry ex-wife, and later bashes one of the most cherished patriotic symbols in America. As his life spirals out of control, Charlie embarks on a journey to a remote island in his district whose eccentric inhabitants are in the middle of a shooting war over their fishing grounds.

Doree A. Austin
as Esther, A Constituent

Thomas Hurd
as Father of Soldier

Miriam A. Hyman
as Abigail

Critic Reviews for The Congressman

The Congressman's politics and morals are childishly simple, featuring archvillains suffering buffoonish pratfalls and love stories that start up abruptly and quickly fizzle.

Mr. Smith Does Not Go To Washington. Hey, a dramatic film actually about something. In this case, Treat Williams does dismayed and dropping out of DC politics, as The Congressman. But first invoking Sen. Margaret Chase Smith denouncing McCarthy back then.

Schmaltzy, simplistic and sincere - about "slowing down to the rhythm of the sea."

This earnest political drama means well but deserves no votes for its stilted dialogue, poorly drawn characters and inept plotting and direction.

Audience Reviews for The Congressman

There are no featured audience reviews yet. Click the link below to see what others say about The Congressman!