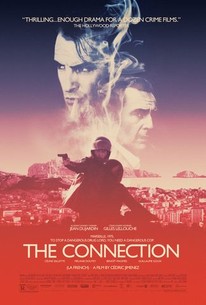 Critics Consensus: The Connection doesn't do itself any favors by forcing comparisons to The French Connection, but it's a reasonably entertaining thriller in its own right.

Critics Consensus: The Connection doesn't do itself any favors by forcing comparisons to The French Connection, but it's a reasonably entertaining thriller in its own right.

Critic Consensus: The Connection doesn't do itself any favors by forcing comparisons to The French Connection, but it's a reasonably entertaining thriller in its own right.

Directed and co-written by Cédric Jimenez, THE CONNECTION was entirely shot on 35 mm and is the European flipside to William Friedkin's The French Connection. A stylish, 70's-period crime thriller inspired by true events, it tells the story of real-life Marseilles magistrate Pierre Michel (Jean Dujardin) and his relentless crusade to dismantle the most notorious drug smuggling operation in history: the French Connection. In his crosshairs is charismatic and wealthy kingpin, Gatean "Tany" Zampa (Gilles Lellouche), who runs the largest underground heroin trade into the States. Though the fearless and tenacious Michel, aided by a task force of elite cops, will stop at nothing--including boldly orchestrated drug raids, devastating arrests, and exacting interrogations--to ensure the crime ring's demise, Zampa's "La French" always seems one step ahead. As La French mounts its retaliation, Michel will be forced to make the most difficult decision of his life: to continue waging his war, or ensure his family's safety, before it's too late. (C) Drafthouse

Martial Bezot
as Gypsy
View All

News & Interviews for The Connection

View All The Connection News

Critic Reviews for The Connection

A more sober exploration of this world would have been more effective in making this case to the skeptics-the very people who need to be convinced if this kind of more holistic thinking is to make inroads into the public at large.

The movie's strength is in its conception of Michel and Zampa, who develop a destructive rivalry, rooted in their mutual determination to prove their superiority.

A byzantine, if ultimately conventional, heroic tale that feels like a guided tour down a familiar alley.

There is ample photographic evidence that the '70s were not, in fact, the best-looking, coolest decade ever. But you wouldn't know it from watching The Connection.

It's a stylish affair, very solidly made if not exactly breaking new ground in our understanding of events or in the way the movies depict them.

It may prove too slow for some and the meandering can be a little maddening, but overall it's worth the effort.

Lovers of period crime capers and fans of the original Friedkin film should definitely take note. But those new to the considerable history behind the making of the film may feel a bit distanced by Jimenez's approach.

The Connection is worth it almost solely on the basis of watching Dujardin and Sallette.

The Connection blends tense drama, upbeat humour and breathless action to depict the truth of this rugged underdog story.

Style and star power make for a fine example of a crime thriller that fits in nicely within the crowd, even if fails to stand out from it.

Not just a strong likeness of Michel, Jean Dujardin has the right over-sized presence for the honest Magistrate.

It's familiar. We see the tale unfolding before our eyes from the beginning. But that doesn't make it any less enjoyable. It's a fast-paced story, confidently told.

Audience Reviews for The Connection

This is a polished French product, as one would expect, even if the personages are a little caricatured. The production is perfectly styled for 1970s Marseille, and the bright, white Mediterranean light and sweeping coastal vistas are superb. The story is gripping on the French drug-busting theme, with some dangerous Italian wit on the side. No film on the French Connection would be complete without a car chase; this one is not what you'd expect. Rather strangely, just as you think that the film is about to end, it starts up again with the characters taking on wholly new aspects, even reversals of who they previously were, as if you are watching not even two episodes of a miniseries stitched together, which perhaps it was designed to be, but a rather disjointed sequel. The ending is most unsatisfactory, as indeed it must have been, if that is what occurred, but it is not surprising. A lot of modern crime fiction and film from Europe today is about the inevitability of corruption and the persistence of the various gangs and clans. It seems then that little has changed, except no doubt to get worse, since the period depicted in this film.