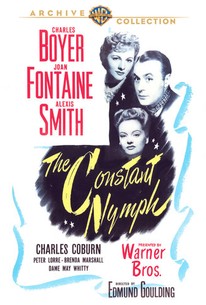 In this filmization of Margaret Dean's novel, a self-centered European musician is idolized by a young Belgian girl with a serious heart condition. Though he is fond of the girl, the composer opts for a wealthy marriage to her socialite cousin -- and lives to regret the move.

Dame May Whitty
as Lady Longborough

Critic Reviews for The Constant Nymph

Yet, apart from a self-consciously boisterous opening, I found the film moving.

This Hollywood romantic drama is star Joan Fontaine's favorite of all her films.

The Constant Nymph's most telling moments slip by rather than announce themselves.

Audience Reviews for The Constant Nymph

'The Constant Nymph' tells the story of a delightful young girl (Joan Fontaine) who has a crush on an older man (Charles Boyer), a friend of her father's. Fontaine is fantastic, grabbing us from the start with infectious energy, and truly channeling what it is to be a teenager, despite being 26 years old at the time. Boyer turns in a strong performance as well, playing a headstrong composer of modern symphonies, which are short on melody and jarring. He marries a rich woman (Alexis Smith), and the two soon butt heads over social functions, as well as her jealousy over the special relationship he has with the young girl. Despite this relationship and all of the dreamy glances Fontaine casts in Boyer's direction, those who liken the film to Lolita are off-base. There is such purity and chasteness here, with Fontaine's character having a sense of honor against doing wrong, and Boyer's having no lascivious interest in her or her sisters at all. They are the polar opposites of Dolores Haze and Humbert Humbert, who between flirtation, predation, statutory rape, and ultimately, humiliation, have us cringing (though perhaps unable to look away). The title word here, 'nymph', should be considered simply as a young maiden, without the sexual connotations it's sometimes associated with. I really liked this innocence, it makes the story tug on the heartstrings all the more, and I also liked the civility and grace by which even the strongest and most personal feelings are expressed. The plot borders on melodrama but it's the strength of the performances that carry it for me. Fontaine was well worthy of her Oscar nomination, Boyer ranges from troubled artist to affectionate 'uncle', and Alexis Smith simmers visibly as she tries to control her feelings. It wanders dangerously close to cloying, but ultimately is just the right amount of sweet, and rather touching.

Very good. I hadn't seen a Peter Lorre film in awhile and although he is the supporting role here, he makes it a better one. Interesting interplay between Boyer and the two cousins...each seeking his heart. What decision will he make?