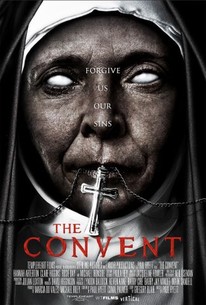 In the early 17th century, innocent young Persephone is falsely accused and put on trial for her life. Her fate seems sealed except for the timely intervention of the mysterious Reverend Mother offering her not just sanctuary, but hope. For the Reverend Mother is the self-appointed leader of a small religious retreat, a secluded Priory, where her fellow Sisters devote their lives to the Lord and seek atonement for their pasts. But upon arrival, Persephone is plagued with terrifying visions and soon realizes that it's not salvation that awaits but a battle for her very soul itself.

Michael Ironside
as The Magistrate

Ryan Oliva
as The Diabolical

Steve While
as Henry

Ryan Oliva
as The Diabolical

Steve While
as Henry

Critic Reviews for The Convent

Bad entertainment because the film doesn't bring up any real questioning. [Full Review in Spanish]

Not that scary, but a game cast and a production team that punches WAY above its budget really lift this spooky period piece.

There are no featured reviews for The Convent at this time.