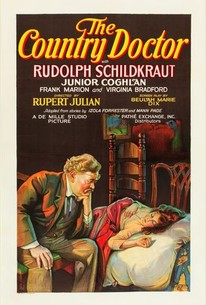 The well-publicized (and overexploited) birth of Canada's Dionne Quintuplets in 1934 formed the basis of The Country Doctor. Jean Hersholt starred as Dr. Allan Dafoe, the real-life medico who delivered the famous quints (who appear in person towards the end of the film). The film recounts Dafoe's difficulties in ministering to the somewhat backward residents of his tiny Canadian community, and his battle with a local bigwig who wants to bring in a "modern" doctor. The Dionne births transform Dafoe into a local hero, leading to his winning of the Order of the British Empire. In real life, Dr. Dafoe effectively wrested custody of the Dionne quints away from the parents, then cashed in on the subsequent merchandising; later on, public opinion would turn against Dafoe, defiling him as an opportunistic cad.

William 'Billy' Benedict
as The Gawker
View All

Critic Reviews for The Country Doctor

John Qualen is perfect as the bemused father, and every quintuplet joke you ever heard is pulled with fresh effect...

The Country Doctor is a little too long.... On the whole, however, it's entertaining and well handled.

It is all the better for its reserve and operates amicably within its bounds at a pace that matches its rural setting.

There are no featured reviews for The Country Doctor at this time.