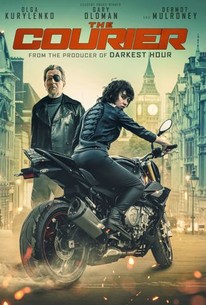 This intense action-thriller unfolds in real time as two embattled souls fight for their lives. Academy Award (R) winner Gary Oldman (The Dark Knight franchise) stars as a vicious crime boss out to kill Nick, the lone witness set to testify against him. He hires a mysterious female motorcycle courier (Olga Kurylenko, Quantum of Solace) to unknowingly deliver a poison-gas bomb to slay Nick, but after she rescues Nick from certain death, the duo must confront an army of ruthless hired killers in order to survive the night.

Olga Kurylenko
as The Courier

Greg Orvis Conway
as The Sniper

Critic Reviews for The Courier

Ex 'Bond girl' Kurylenko kicks ass against a motley crew of musclebound, tattooed masculinity, with an ironic smile that reminds us this is little more than a fun genre ride - with viciously gory kills.

[The Courier is] a leaden action film that lacks both imagination and logic.

Save for the game Kurylenko, it should be bed without supper for everyone involved here.

Oldman delivers his lines with a strange lethargy and tonelessness, as if - just before speaking - he has just realised that income tax will have to be deducted from his fee.

Adler and his team of screenwriters have crafted a solid plot... But the locations for these big battles are so cramped and unexciting that even a star as fun to watch as Kurylenko can just barely shine.

In the moronic thriller The Courier, nothing works on any level, but most of all where it matters most-a script that makes sense.

It's mercilessly over-edited action unfolds with a tight-budget fury on two-and-a-half levels of a parking garage, and the result is dull, stupidly violent and dreadfully repetitive.

An almost inert action movie, with London shots that look like taken from archives. [Full review in spanish]

What you need to know is that most of the action takes place in a London multi-storey car park, some of the supporting performances are dreadful, and that this has no place on anyone's Christmas viewing list.

It rather plays out as if it wanted to be the next blockbuster action film but it just doesn't ever evolve.

The film makes for a limp and tensionless attempt at on-off drama.

There are no featured reviews for The Courier at this time.