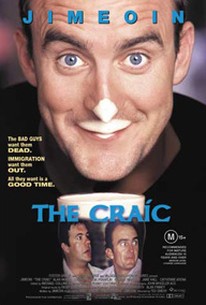 "Craic" is Irish slang for a laugh or a good time, which is what this comedy about two Irishmen on the run in Australia has to offer. Fergus (Jimeoin McKeown) and his best friend Wesley (Alan McKee) are living in Belfast when they incur the wrath of a violent IRA leader, Colin (Robert Morgan). Since Ireland no longer seems like a safe place to stay, the boys hit the road and end up in Sydney, where they manage to find work despite the fact they're illegal aliens. Fergus gets a chance to appear on Australian TV's answer to "The Dating Game" and wins a vacation in Queensland with a pretty but half-bright beautician, Margo (Kate Gorman). While Fergus is enjoying his holiday (if not Margo's company), immigration authorities raid the house where Wesley, Fergus and several other illegals have been staying. Wesley takes it on the lam and tracks down Fergus in Queensland, just in time for Colin to show up, who is in Australia as part of a witness protection program. Fergus and Wesley are still angry at Colin, and vice versa, and so a mad chase ensues as Fergus and Wesley head for the outback with immigration agents, secret service men and IRA renegades hot on their trail. Jimeoin McKeown is a popular stand-up comic in Australia, and Alan McKee is the star of the BBC's The Bill; their combined box-office draw gave The Craic the second-biggest opening week gross ever for an Australian film at home, bested only by Muriel's Wedding in 1994. ~ Mark Deming, Rovi

Critic Reviews for The Craic

There are no critic reviews yet for The Craic. Keep checking Rotten Tomatoes for updates!

There are no featured reviews for The Craic at this time.