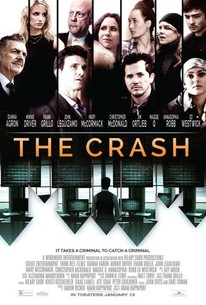 Set in the future when the US economy is on the brink of yet another massive financial crisis, The Crash tells the story of Guy Clifton, a federally-indicted stock trader, who is secretly enlisted by the federal government to help thwart a cyber-attack aimed at the US stock markets--an attack that could permanently cripple the economy. Our 'richer than God' protagonist is charged with assembling a team capable of running the government's top secret 'shadow stock exchange' in an attempt to keep the markets from mass panic in the event the cyber-hijack is successful. Having only ever been fueled by his love of money, Guy fully intends to use his insider knowledge of this world catastrophe for personal gain until he unearths the organization behind the attack and discovers its motives. For the first time in his life, Guy is challenged to make decisions not only for himself, but also for the good of his country--decisions that are rooted in morality rather than dollar signs. This fast-paced, save-the-world thriller is a story of redemption that also challenges the audience to question if their money is safe, and if so, for how long.

Seema Mody
as Herself

These are all cartoon figures out of Frank Capra's most feverish populist nightmares.

What is The Crash about? First off, it's about Mr. Rappaport's ability to get his film produced, and hats off to him for that, since it couldn't have made much sense on paper and hasn't grown in coherence on screen.

An intriguing if flawed techno-thriller that gets an effective boost from a high-caliber cast.

The Crash fumbles between bad diatribe and bad domestic drama, complete with subplots about absent parents and childhood cancer.

Too bad The Crash lives up to its inauspicious name.

Let's just say that Ron Paul supporters will probably embrace The Crash and the theories it comes up with.

In its strained effort to get your blood boiling, the script trots out trite cliches that diminish the suspense.

The more Rappaport tries to pull urgency out of thin air, the harder the movie flounders, finding its title more descriptive of production ambition than dramatic content.

Detailed knowledge of the subject and a fine ensemble cast of characters makes for a compelling (albeit wholly fictional) financial thriller.

The film may be too preposterous to take seriously, but at least writer-director Aram Rappaport trains his sights on the right enemies.

Gotta assume that it's director Aram Rappaport who is the real hacker, he breached the security of all these actors, and used the personal information that he found in order to blackmail them into being in this garbage, because I cannot see any other possible explanation for how this happened. If not a hacker, then Aram Rappaport is at the very least, a hack. No wait, I've got one more: "The Crash? More like... The Trash."

Good film...really solid cast and story. I can't understand why the critic scores are so terrible.

An interesting look at what may happen if the US stock market was hacked. Whilst this isn't an a-list film, it does have a few familiar faces. I thought the story was intriguing, if not entirely plausible.