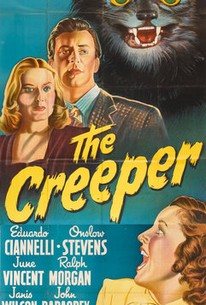 When Universal went briefly out of the "B" horror film business in 1946, the studio sold two of its productions to other studios. The Brute Man went to PRC, while The Creeper was shipped off to 20th Century-Fox, where it lay on the shelf for nearly two years before its release. Dr. Morgan (Onslow Stevens) and Dr. Cavigny (Ralph Morgan) star as a brace of scientists who return from the West Indies with a potent, phosphorescent serum that allegedly changes human beings into cats. Though the medical value of this serum is rather doubtful, that doesn't stop Morgan from experimenting on human guinea pigs-nor from killing Cavigney when the latter disapproves. All sorts of mayhem transpires before the clawed, meowing "Creeper" is halted in his paw-tracks. Though billed first, Eduardo Ciannelli has little to do in his red-herring role.

David Hoffman
as Andre
View All

Critic Reviews for The Creeper

There are no featured reviews for The Creeper at this time.