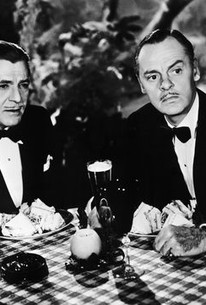 Warner Baxter makes his fourth appearance as Dr. Robert Ordway, criminal-turned-criminologist, in Crime Doctor's Courage. This time, Ordway investigates the murder of fortune-hunter Gordon Carson (Stephen Crane), not long after his marriage to wealthy Kathleen Carson (Hillary Brooke). It's just possible that Kathleen, taking into consideration the mysterious deaths of Carson's previous wives, may have killed her husband out of self-preservation. Ah, but there are several other suspects around and about, including a brace of Spanish dancers (Lupita Tovar and Anthony Caruso), an eccentric young man (Robert Scott) and a mystery novelist (Jerome Cowan). Murder-movie buffs will probably glom onto the killer's identity long before Dr. Ordway does.