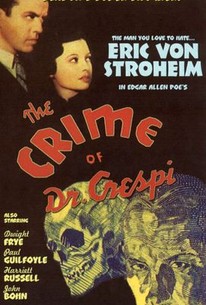 The Crime of Dr. Crespi Photos

A decidedly un-subtle performance from Eric von Stroheim marks this hilariously odd Republic production (vaguely inspired by Edgar Allan Poe's The Premature Burial), in which he plays an impossibly flamboyant mad medico who decides to torment his romantic rival by injecting him with a drug that triggers a cataleptic episode, simulating death. Eye-rolling Eric then seals the poor dope in a coffin and sits back to watch the fun when the drug wears off. Anyone who can out-leer co-star Dwight Frye deserves some degree of respect, and von Stroheim camps it up like there's no tomorrow. It's hard to imagine how anyone, claustrophobes included, could have found this film suspenseful when faced with Eric's wild gesticulating, insane ravings and madcap speeches, but there's plenty of entertainment to be found nonetheless.

John Bohn
as The Dead man

Dean Raymond
as Minister
View All

Critic Reviews for The Crime of Dr. Crespi

There are no critic reviews yet for The Crime of Dr. Crespi. Keep checking Rotten Tomatoes for updates!

There are no featured reviews for The Crime of Dr. Crespi at this time.

The Crime of Dr. Crespi Quotes