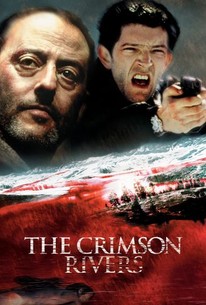 Veteran cop Pierre Niemans is sent to Guernon to investigate a bizarre murder near a legendary private school isolated in the Alps. And it's no ordinary murder; the killer has been very methodical, leaving twisted inexplicable clues to his motive. Complicating matters are the university administrators who are uncooperative and somewhat defiant to Niemans' questioning. Meanwhile Max Kerkerian, an impetuous young cop and former car thief, arrives at a desecrated graveyard 180 miles away. Someone has disturbed the grave of a child who died twenty years before. These two seemingly random events are about to collide as the separate investigations lead the detectives right to one another. The more experienced Niemans begrudgingly joins forces with the brash Max to track down the killer. Despite his ribbing and constant sarcastic banter, Max respects the older cop. The two crimes are assuredly linked--but how? What could the prestigious school possibly have to hide?

Francoise Loreau
as Nun in Convent

Christophe Rossignon
as Policeman in Station Wagon on Bridge

Dominique Bettenfeld
as Policeman with Theory

Vincent Schimenti
as Policeman
View All

Critic Reviews for The Crimson Rivers

This is a French film desperate to please an American audience.

Could teach many an American thriller a thing or two about sophisticated creepiness.

A wild ride, even if it often transgresses logic and believability.

It ends up being more about stage blood and stupid plot tricks.

By movie's end, you'd swear you were on Hollywood Boulevard, with Mel Gibson and Danny Glover in Lethal Weapon 11.

The most American French movie ever, it's like a Hollywood blockbuster that accidentally got made by smart people. And it's excellent.

It has good tough-cop banter, a couple of satisfying action scenes ... and a load of plot twists you won't see coming.

A film more likely to make scratch your head than bite your nails all the way home.

I cherish the rush I got, and I can only laugh at all the problems I came up with when I thought the movie through.

The film has a finely tuned drive, an intriguing build in its plot, and a unique style that balances atmosphere and absurdity.

Audience Reviews for The Crimson Rivers

Whilst being a gruesome psychological horror detective story it is actually rather enjoyable thanks to a script that's more suitable as light entertainment. Lots of silliness in a fun way and a plot that isn't too taxing to figure out with a back story about eugenics that will make it quite memorable, if nothing special or outstanding in anyway.

Not incredible, but works good enough for time pass.

3 and 3/4's. Pretty good. I'm not really on board with alot of French films, but this was rather enjoyabe. EXCEPT...they threw in some strange fight scene, with an even stranger video game sound effect voice over. MINUS half a point for that lame move....otherwise, pretty decent movie.

It's the Silence of the Lambs meets Seven. A first-rate edge of your seat thriller. Spine-tingling, heart-racing and nerve-frying. Chilling and unforgettable. A breathtaking thrill-ride. Tension and suspense in unbearable doses that will blow you away all the way to the explosive finish. You wont know what hit you right until the very end. It's intense, stylish and outstanding. Vincent Cassel and Jean Reno are sensational. They are an impressive combination. A terrific and brilliantly original thriller. An unstoppable adrenaline-rush that has the suspense and action to back it up.