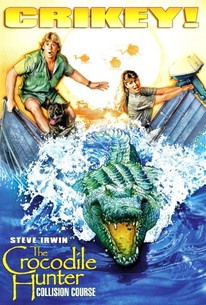 Critics Consensus: Aside from the unnecessary plot about a downed US spy satellite, there's not much difference between the movie and the TV show.

Critics Consensus: Aside from the unnecessary plot about a downed US spy satellite, there's not much difference between the movie and the TV show.

Critic Consensus: Aside from the unnecessary plot about a downed US spy satellite, there's not much difference between the movie and the TV show.

Australia's high-impact answer to Marlin Perkins moves from the Animal Planet channel to the big screen in this wild and wooly comedy-drama. Conservationist and hyper-enthusiastic outdoorsman Steve Irwin (playing himself) and his wife and partner Terri (Terri Irwin) spend their days monitoring wildlife in the rugged plains of Australia, with Steve rarely passing up an opportunity to go head to head with a rambunctious animal who could seemingly kill him without breaking a sweat. Steve has learned that a rogue crocodile has been attacking the livestock of Brozzie Drewitt (Magda Szubanski), an eccentric rancher with no love for the big reptiles. Steve has decided to capture the troublesome crocodile and take it to safer waters, but as it turns out, the beast has been eating more than Brozzie's cattle -- the grapefruit-sized remnant of an American spy satellite has crashed to Earth in Australia, and the hungry crocodile has swallowed it whole. A pair of serious-minded but half-bright CIA agents, Vaughan (Kenneth Ransom) and Wheeler (Lachy Hulme), have been ordered to recover the satellite, which still has highly important data inside, and when they discover Steve has the croc with the satellite in its belly, they're convinced Steve and Terri are international spies, and they set out to wrestle the big critter away from him, which is no simple task. The Crocodile Hunter: Collision Course was directed by John Stainton, who directed most of Irwin's television documentaries; Stainton reportedly never had Irwin read the script, so he would give a more naturalistic and spontaneous performance with the film's animal cast.

Steve Irwin
as Himself

Terri Irwin
as Herself

Basically a 70-minute version of the TV show.

The red-faced Irwin is exhilarating to watch.

It's part Discovery Channel, part evening at the Aussie improv, and it proves surprisingly watchable even at 90 minutes.

Why, you may ask, why should you buy the movie milk when the TV cow is free? There's no good answer to that one.

Kids will love Irwin's risky likeable nature as he wrangles with vicious animals, while they appreciate the family friendly action and suspense.

strictly for kids and that's not an indictment. Steve is a big kid himself, so he knows what will get the kiddies laughing

...there's a certain amount of energy to [Steve Irwin's] performance that keeps the film afloat...

If you're a Crocodile Hunter fan, you'll enjoy at least the "real" portions of the film. If you're looking for a story, don't bother.

Thankfully, the film, which skirts that rapidly deteriorating line between fantasy and reality ... takes a tongue-in-cheek attitude even as it pushes the Croc Hunter agenda.

Saw it as a kid, I remember enjoying it.

it's entertaining and also a big screen debut to the late steve irwin. it's full of fun, action, humor and steve with a croc. B

So cute. I love The Crocodile Hunter.

A sensational media fad like Jack-Ass, Jerry Springer, Spice Girls, Borat, etc. Steve Irwin plays some dangerous games with wild animals and puts on quite a goofy show. I felt embarrassed and exploited watching this short-lived craze of a movie. Now that Steve Irwin is dead, it makes the movie a morbid curiosity found in a Previously-Viewed bin.