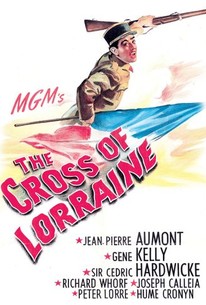 The Cross of Lorraine Photos

The time is World War II. A group of disillusioned French soldiers are approached by Nazi troops and promised safe passage to their homeland. The Frenchmen willingly surrender, only to discover that their next destination is a German concentration camp located near a Gallic village. The anticipated escape attempt results in an uprising from the French villagers--hence the film's title, which refers to the emblem of the Free-French underground. Cross of Lorraine compensates for its Hollywood's-eye view of France (no more realistic than the Paris of the Ernst Lubitsch musicals) with some remarkably graphic sequences showing the extent of German brutality. The melting-pot cast includes Frenchman Jean-Pierre Aumont as a patriot, Hungarian Peter Lorre as a hateful Nazi, American Gene Kelly as a cynical victim of German torture, and Canadian Hume Cronyn as the traditionally rodent-like informer.

Critic Reviews for The Cross of Lorraine

There are no critic reviews yet for The Cross of Lorraine. Keep checking Rotten Tomatoes for updates!

Audience Reviews for The Cross of Lorraine

Where the censors asleep the day they looked at this? Considering the time period remarkably brutal POW drama. Well acted and compelling.

The Cross of Lorraine Quotes