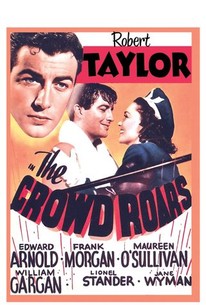 Not a remake of the 1932 James Cagney vehicle of the same name, The Crowd Roars is set in the sweat-stained world of professional boxing. Handy with his fists, young Tommy McCoy (Robert Taylor) is virtually pushed into the ring by his alcoholic father Brian (Frank Morgan). During his climb to the championship, Tommy accidentally kills one of his opponents in the ring, and is thereafter tagged "Killer McCoy". He then falls in with crooked gambling czar Jim Cain (Edward Arnold), who uses various methods of persuasion to get Tommy to do his bidding. Though the film at first seems to holding the fickle fight fans responsible for the cesspool that professional boxing had become by 1938, the blame is ultimately laid squarely on the shoulders of men like Jim Cain. The Crowd Roars was remade by Mickey Rooney as Killer McCoy (1947).

Gene Reynolds
as Tommy McCoy as a boy

Critic Reviews for The Crowd Roars

The Crowd Roars could have been great drama -- real and compelling. As it is, the picture is a rousing little opus with two or three outstanding portrayals and the usual incredible, off-key happy ending.

There are no featured reviews for The Crowd Roars at this time.