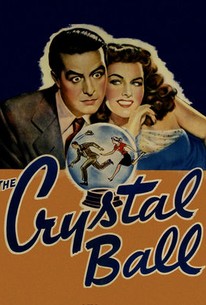 Overloaded with unreleased films in 1942 and 1943, Paramount Pictures cleaned house by diverting several pictures to United Artists. One such effort was The Crystal Ball, wherein beauty contest loser Toni Gerard (Paulette Goddard) takes a job as a sideshow fortune teller. Subbing for the ailing head (Gladys George) of a fake medium racket, Toni whimsically advises attorney Brad Cavanaugh (Ray Milland) to purchase some property that is coveted by the government. Cavanaugh follows her advice, nearly ruining himself in the process. All turns out okay in the end, but there's a last-minute entanglement when several of Toni's disgruntled clients converge upon her all at once. Strictly second-rate, The Crystal Ball is salvaged by the work of such surehanded supporting players as William Bendix, Cecil Kellaway, Mary Field, Ernest Truex, Iris Adrian, Nestor Paiva and Mabel Paige (in her film debut). ~ Hal Erickson, Rovi

Mabel Paige
as Lady with pekinese

Sig Arno
as Waiter at Stukov's

Hillary Brooke
as Friend of Jo's

May Beatty
as Dowager

Charles Irwin
as Spieler
View All

Critic Reviews for The Crystal Ball

As for the effect of the film's incidental -- it is surely incidental -- content, it is the same as that of a shiny bauble from the leftover counter of Woolworth's.

Audience Reviews for The Crystal Ball

No more than brief side trip to whimsical, this romance teams Ray Milland and Paulette Goddard. There are the machinations typical of this genre present and accounted for, but at the end of the day does it really matter? When the opening credits roll you already know how everything will turn out and there are no surprises to allay your suspicions. Still the cast bring all their powers of charismatic persuasion to the table and thereby make this palatable pablum.