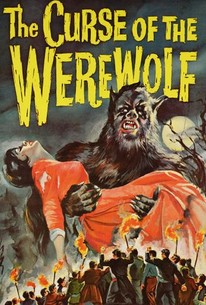 After injecting new life into classic movie monsters Dracula and Frankenstein, Hammer Studios apply their Gothic touch to another monster genre with this excellent, stylish piece -- probably the best of the old school (i.e. pre-Rick Baker) man-to-wolf transformation films in the mold of Universal's The Wolf Man. The title curse surfaces when a mute servant girl bears a child on Christmas day after being raped by a bestial madman and first shows itself at the infant's christening, whereupon the holy water begins to boil. Things go downhill from there, as young Leon's development is marred by savage, violent behavior during a full moon. Upon adulthood, Leon's (Oliver Reed) only relief from his murderous impulses comes from the love of Christina (Catherine Feller)... but he soon begins to fear that this cannot contain the beast within. Liberally based on Guy Endore's The Werewolf of Paris (here relocated to Spain), this film represents Hammer at their early best, building tension through mood and character (Reed turns in a bravura performance) and saving the effective monster transformation for the climax. ~ Cavett Binion, Rovi

Renny Lister
as Yvonne
View All

News & Interviews for The Curse of the Werewolf

View All The Curse of the Werewolf News

Critic Reviews for The Curse of the Werewolf

The last 43 minutes of The Curse of the Werewolf are pretty damn good. The question is how much better they are than the 50 preceding minutes are a tedious grind.

Lon Chaney, Jr.'s Wolf Man may be cinema's most famous lycanthrope, but there can be little doubt that this 1960 film from Hammer Productions is the best werewolf movie ever made.

One of the better Hammer horrors

Audience Reviews for The Curse of the Werewolf

Part of an 8 film set of Hammer horror. The Universal Wolf Man movies were less gothic than the Dracula or Frankenstein films. Hammer remains more consistent by doing a werewolf story that keeps to the Gothic style for which they exceed. So there is nothing adapted from the Lon Chaney Jr. version. IMDb does list a novel by Guy Endore as inspiration for the screenplay. 18th Century Spain is the setting. There is a lengthy prologue to explain the birth of a "cursed" baby who quickly becomes adopted and later shows signs of being a werewolf. There is a political message about a harsh and cruel authority keeping the poor down. The reason for the "curse" is such nonsense. Leon is a boy for a small chunk of time as well. The movie feels much longer than it is, makes you wait forever to finally see Oliver Reed as Leon (an actor who I don't particularly care for, though he is vibrant and snarling here), and then it is so late in the movie when the Werewolf finally appears. I was so impatient and bored by most of the slow moving drama. All the English actors doing Spanish impersonations and the less than impressive werewolf makeup once it was actually given screen time left me unimpressed.

Classic furry tale set in Spain for this wolfman fable and its not too bad for a different look and feel. Its classic 'Hammer' all the way of course, well spoken actors mixed with cockney Londoners haha very Spanish feel I assure you ;) But its the look of the film which is really nice, yes the sets are obvious but they are also really well crafted, very lavish and colourful, really looks good. The actual wolfman design is basic by todays standards and doesn't look too great but not that bad either, a silverish, white haired choice of the Classic Chaney look which isn't far from the new 'Wolfman' movie design. Blue eyed Reed plays the part as well as can be whilst his gruff looks do match the role nicely, other cast members are all as you would expect from 'Hammer', both theatrical and bold in their posing and speeches. Plenty of red paint throughout the film as animals and people get their throats torn out, lots of screaming ladies in distress and an ending not far from 'Frankenstein', problem is the director spends too much time building the story and not leaving enough film time for wolfing around.

Curse of the Werewolf started off in an unconventionally amazing way as it started with some gruesome territory involving rape, gruesome murder and other elements you wouldn't expect from a movie from the early 60s. I liked how it told an almost life story of a werewolf giving the curse more spiritual origins than mystical ones. Terence Fisher's direction is superb and as cool as the werewolf looked, the fact that you don't see him until the last 10 minutes of the movie was pretty dumb. The fresh take was a nice change but the lack of monster kind of ruined it. Not a bad watch but its been done better.

The Curse of the Werewolf Quotes