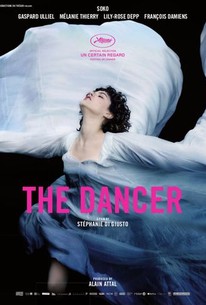 This biographical period film focuses on the life of Loie Fuller, who was born and raised in the suburbs of Chicago before becoming a sensation in the world of art, dance and science in Paris around the turn of the 20th century. Soko plays Fuller and Lily-Rose Depp takes on the role of Isadora Duncan, a fellow American dancer who became Fuller's protégé. Stéphanie Di Giusto makes her directorial debut in this drama based on Giovanni Lista's 2007 book about Fuller.

Amanda Plummer
as Lili
View All

Soko, under the direction of Stéphanie Di Giusto, lets us see Fuller's fearlessness in giving audiences performances unlike anything anyone had ever seen before.

If only Di Giusto more ambitiously broadened her scope, she would have made a fleet-footed tribute for the ages instead of stumbling over such rich possibilities.

"The Dancer" seems genuinely hostile to its subject, whose real-life accomplishments deserve better.

Evasions of fact render the project suspect, but the chance to observe Fuller's genius realized onstage almost redeems it.

Like Loïe Fuller's serpentine dance, the film is structured on repetition: spinning and spinning but never actually taking us nowhere.

Lily-Rose Depp lends solid support as up and coming dancer Isadora Duncan, whose relationship with Loie turned into a rivalry that shaped both of their careers.

Cinematically stunning and with exquisite performances, THE DANCER presents Fuller's story beautifully, while capturing the social environment for women during the late nineteenth century.

Whatever its shortcomings, THE DANCER deserves credit for spotlighting Loie Fuller's work for a new generation.

The Dancer will be a frustrating experience for pre-existing fans of Loie Fuller; more so the more they know her life story.

Artistically executed in its cinematography, Dancer is a poetic biopic of a young woman at the turn of the 20th Century.

There are no featured audience reviews yet. Click the link below to see what others say about The Dancer (La danseuse)!