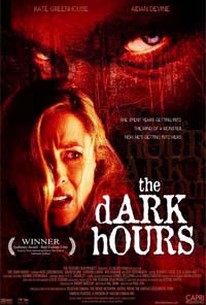 A woman's mistakes come back to haunt her in a terrifying and very literal manner in this thriller. Dr. Samantha Goodman (Kate Greenhouse) is a clinical psychiatrist who works with patients at an institution for the criminal insane in Canada. Things have not been rosy for Sam lately -- she's been violently attacked by one of her patients, her marriage to husband Dave (Gordon Currie) is in bad shape, and she has an inoperable brain tumor that's growing at an alarming rate. Sam needs a weekend away from the city, but what Dave has set up isn't especially relaxing for her -- a short holiday at a cabin in the woods, where Dave will be working on editing his latest book with the help of Melody (Iris Graham), Sam's younger and more attractive sister. As Sam watches sparks begin to fly between her sister and her husband, Harlan Pyne (Aidan Devine) and his friend Adrian (Dov Tiefenbach) break into the cabin and announce their presence by shooting Sam's pet dog. Harlan is a convicted sex offender and murderer who was placed under Sam's care in the institution and wasn't happy with the experimental treatment he received; having escaped, he and Adrian have tracked her down and decide to take revenge by forcing Sam, Melody, and Dave to participate in a series of strange and humiliating games -- at gun point. The Dark Hours was the first feature-length film from director Paul Fox, who previously distinguished himself working on a number of successful Canadian television series.

Kathryn Haggis
as Waitress
View All

Critic Reviews for The Dark Hours

By the time The Dark Hours starts to get good, it's more than midway into the movie.

The Dark Hours is a remarkably assured homage to psychological horror films from the sixties and seventies.

Proves as cliche-ridden as its title.

A family-in-peril psychodrama that teeters on the edge of being a quality indie exercise.

A cold and moody psychodrama poised frustratingly on the border between novel and banal.

Speeds through its scant 80-minute running time with no muss, no fuss, and a surprisingly watchable demeanor.

While it's possible to watch The Dark Hours, strictly as a tense as hell backwoods-psycho-torture film, there's a lot more going on here than meets the eye.

The real terror lies in imagining just what type of carnage the unhinged Harlan could unleash with that woodchopper of his.

Paul Fox takes the cake and falls flat into it with one of the limpest stalker terrors to ever frustrate an audience.

Audience Reviews for The Dark Hours

Ho boy. Don't look for any great indie revelation regarding the psychological thriller. Expect what you would anticipate in a film of this genre..with nothing special.

I was confused. What of all that really happened? Movies like this just make me mad. I'll admit, this had some pretty stunning moments here and there. However, the rest of it was ruined by absolute confusion...

The Dark Hours is one of those rare horror films that takes itself and its audience seriously. There is no black humor, no manic referencing of horror classics and no "someone-is-about-to-get-diced" eerie music. As a result, Paul Fox has succeeded where most American film directors have failed - in making a scary movie that is actually scary. This film reminds me somewhat of Alexandre Aja's hugely over-hyped "Haute Tension". Both films contain violent home invasion scenarios, which are subsequently turned upside down by revelations about the sanity of the protagonists. In this case, the central character, Samantha, joins her husband and sister for a weekend in their remote cabin. Unfortunately, their stay is well and truly ruined by the appearance of Harlan; an ex-patient of Samantha's intent on revenge. As the story unfolds, it becomes increasingly ambiguous as to whether Harlan is real or a projection of Samantha's own psychosis. The reason why I find The Dark Hours superior to "Haute Tension" is that within this film's (albeit unlikely) parameters, the plot twist not only makes sense, it also serves to raise the suspense. Neither of which can be said for the events in Aja's film. Gore hounds need not be concerned. This is not a lame "psychological" thriller. The Dark Hours contains a significant amount of gritty violence and one startling act of self-mutilation. The gore effects are uniformly well done and horror fans will enjoy several unexpectedly grim plot developments. The bloodshed is balance nicely by the terror of Harlan's games (his interpretation of "Truth or Dare" was a highlight) and the uncertainty about Samantha's own mental state. The performances are generally very good. Kate Greenhouse is a revelation as Samantha. Hopefully she'll be leaving Canada for Hollywood in the not too distant future. Aidan Devine is another standout as Harlan. This actor has been under-appreciated for far too long. Harlan is yet another memorable character to add to his long list. The supporting cast is not as impressive. The actors who play Samantha's husband and sister are rather dismal. Their responses during the "Truth or Dare" game are unintentionally amusing, which was really quite a feat given the context. Paul Fox contributes to the film's success with his stylish direction, particularly his innovative use of sound effects and editing. The Dark Hours leaves a number of questions unanswered. You do not have to scratch too far beneath the surface to find holes in the plot, even if they are neatly camouflaged by flashbacks and clever editing. Despite these faults, I enjoyed the film immensely.