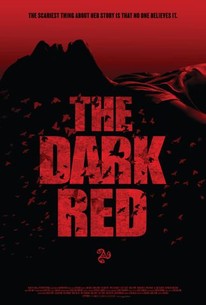 A young woman is committed to a psychiatric hospital claiming that her newborn has been abducted by a secret society called the Dark Red -- an ancient, underground cult that harvests and controls an incredibly rare blood type that gives one the power to hear and guide another person's thoughts. She says that she is special: that she carries a pure and powerful strain of the blood like nothing seen before, and that the society sees her and her child as its next evolution or perhaps its greatest threat, should she turn against them. Is the Dark Red entirely a figment of her imagination a complex coping mechanism to overcome a terrible personal tragedy or is there some truth behind her story?

News & Interviews for The Dark Red

View All The Dark Red News

Critic Reviews for The Dark Red

Intrigues with an offbeat premise that it ultimately doesn't develop to fully satisfying results.

The Dark Red isn't afraid to get a little bloody, and it's all the more entertaining for it.

An inventive horror story that needs some of the informational spaces filled in, and also needs some star power in its cast. Still moviemaker Dan Bush continues to show real skill in the world of making movies.

Director-cowriter Dan Bush is an assured filmmaker who carefully builds the story using darkly dramatic flashbacks before flipping everything on its head.

The Dark Red is an interesting way of exploring the hysterical mother trope. Helped massively by a great lead performance, The Dark Red may just have birthed the next screen Sarah Connor.

Dan Bush's The Dark Red is a tale of maternity and madness, vampiric predation and class exploitation.

The Dark Red is a smart little film with a more sophisticated understanding of its subject matter and more to say than past stories of this sort might lead you to expect.

There are no featured reviews for The Dark Red at this time.