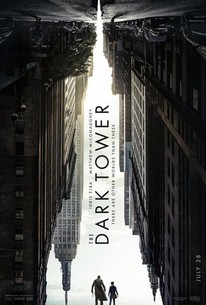 Critics Consensus: Go then, there are other Stephen King adaptations than these.

Critics Consensus: Go then, there are other Stephen King adaptations than these.

Critic Consensus: Go then, there are other Stephen King adaptations than these.

There are other worlds than these. Stephen King's The Dark Tower, the ambitious and expansive story from one of the world's most celebrated authors, makes its launch to the big screen. The last Gunslinger, Roland Deschain (Idris Elba), has been locked in an eternal battle with Walter O'Dim, also known as the Man in Black (Matthew McConaughey), determined to prevent him from toppling the Dark Tower, which holds the universe together. With the fate of the worlds at stake, good and evil will collide in the ultimate battle as only Roland can defend the Tower from the Man in Black.

Matthew McConaughey
as Man in Black

Critic Reviews for The Dark Tower

Danish filmmaker Nikolaj Arcel (A Royal Affair) directed, and I'm not sure why.

Not so much a stinker of a movie as a bafflingly incomplete one, The Dark Tower has presumably been inflicted with so many cuts it's like watching a 95-minute trailer.

No one involved in The Dark Tower seems to have given a damn about what they turned out, so why should anybody else?

The path to Elba and McConaughey's inevitable showdown is slick and fun to watch.

King fans were troubled to learn that the film adaptation would only be 95 minutes long; for most of us, that'll be more than plenty.

Not even bad enough to be fun.

There's nothing horrendous or offensively bad about the movie, but it's just too preoccupied with racing towards the finish line to stick with you in a meaningful way.

This condensation of eight Stephen King books may not be quite as vexing as attempting to place all of Shakespeare's texts onto a single Post-it note, but it nevertheless ranks as an exercise in futility.

The Dark Tower fails majorly to take its science-fiction source to epic levels, but still manages to mildly entertain.

Barrages of strangeness (such as a wood monster or the spontaneous ability to slow down time) are so poorly defined that they lack all significance to the heroes.

Audience Reviews for The Dark Tower

In an apocalyptic reality, a sorcerer desires to destroy the world so that he can take over everything, yada, yada, yada. The actors do their job in this that feels like a retread, but perhaps the world building involved is too big of a job for one movie, I thought, and better suited to a television series. As it is the work feels rushed and incomplete, however well done.

An appealing attempt at a movie. nothing works. it feels stilted and just super unbelievable characters!

I have never read any of Stephen King's popular fantasy series, The Dark Tower, so I walked into the long-awaited film adaptation with no investment. I walked out with very little investment. The film peaked at its casting, with Idris Elba as the mythic Gunslinger hunting down a notorious evil sorcerer, The Man in Black (Matthew McConaughey), a.k.a. Randall Flagg. For the first fifteen minutes or so, the world building is pretty straightforward and accessible. The Man in Black is looking across universes for special psychic children whose abilities he can focus to destroy the titular Dark Tower, a monument protecting the stability of all universes. A young kid is having prophetic dreams but appears emotionally disturbed to his family. Before a group of rat people hiding behind human masks can kidnap him, he runs away, finding a portal to Midworld, and into the path of the Gunslinger, who seeks personal vengeance against the Man in Black. From there the movie gets pretty hazy with its rules and lore. The production design of this alien world is a bit bare. The characters stay in an archetypical range and don't give you much reason to care. The action is serviceable but unmemorable, the Gunslinger credo is rather cheesy especially when repeated with such self-seriousness, and sometimes it feels like McConaughey is in a different movie altogether. If you're a fan of the series, I have to imagine you'll be processing some level of disappointment by the end of the film. If you're a franchise novice, like me, you may find some stray things to enjoy in the moment, but the film evaporates from your mind immediately after leaving the theater, banished to the dustbin of bland sci-fi action. Nate's Grade: C

Not having read the books that this film is based on, I went into The Dark Tower with the hopes of having a good time at the movies, with a property that felt fresh. Now, this film isn't going to be winning any awards, but the majority of the reviews have been unabashedly awful for this film, and this is a rare occasion where I completely disagree. Going into a movie like this, as long as you're presented with likeable characters and a premise that's unique enough to hold your interest throughout the entire duration, shouldn't that be enough to at least warrant a mild recommendation? I acknowledge that this film isn't flawless, in fact, you can find numerous issues with it, but I personally found this film to be a lot of fun. Here is why I believe your best interest may be to ignore the poor reviews and form your own opinion. From the very beginning of this film, it promises big things to come. Whether it's just world-building in order to set-up potential sequels or to just simply expand your mind in order to make you enjoy the film at hand, this movie tries very hard to win you over in terms of originality. As young Jake Chambers (Tom Taylor) has horrific dreams of otherworldly goings on, he soon realizes that these visions of a deadly "man in black" and a gunslinger actually exist in the universe somewhere. Discovering a portal that sends him into this world, he quickly learns that he is meant for more. There is a lot to like about the chemistry between Idris Elba and Tom Taylor, as well as how menacingly believable Matthew McConaughey is as the "man in black." At its core, The Dark Tower is about the fact that this "man in black" wants to destroy the tower that binds every world together, in order to unleash hell on (all) Earths. While this is the backdrop of the film in general, the looming rivalry between McConaughey and Elba is really what made this film as enjoyable as it was. I was surprisingly shocked at how much I enjoyed this film for being unique and playing with classic stories, but it was the addition of these two A-List actors that put it over the edge. When their stories meet in the final act of this film, it's not extravagant, but it's satisfying nonetheless. If nothing else, I believe you will enjoy the performances that everyone gives throughout The Dark Tower. While watching this film, it will be very difficult not to nitpick certain elements throughout the majority of the film. The biggest issue this film suffers from is the fact that it seems to be stuffing far too many plot points into a very short 95 minutes. I normally like when a film is short and sweet, but if you have an entire universe of world building that you could be exploring, then why not add that extra 30 minutes? This film flies by, due to the fact that you meet characters, lose characters, jump from world to world, and it expects you to be along for a very quick ride, becoming emotionally invested in multiple things at once. For the most part, The Dark Tower does a good job at holding your attention, but it can feel quite rushed. Aside from that, there will be issues you have in terms of leaving characters in the dust in order to focus on the mains, which will be very frustrating for you, but again, it does its best in the end. In the end, I truly believe the critics are wrong about this film. I can see where the criticisms lie, but The Dark Tower has much more to offer as compensation. Yes, there are many ways that this could've been a better film, but I had quite a bit of fun with it. The script is a little sloppy and pretty rushed, the editing can be jarring at times, and the overall film feels too quick to fully take in, but it makes up for these issues with terrific performances, a unique world, cool action sequences, and a simple premise that many people should find easy and fun to watch. As I said, this movie won't be winning any awards, but it does deserve your attention. The Dark Tower is a surprisingly fun Fantasy flick.