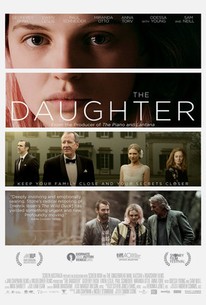 Critics Consensus: With The Daughter, debuting writer-director Simon Stone turns Henrik Ibsen's The Wild Duck into a thoughtful meditation on the bonds of family, friendship, and community.

Critics Consensus: With The Daughter, debuting writer-director Simon Stone turns Henrik Ibsen's The Wild Duck into a thoughtful meditation on the bonds of family, friendship, and community.

Critic Consensus: With The Daughter, debuting writer-director Simon Stone turns Henrik Ibsen's The Wild Duck into a thoughtful meditation on the bonds of family, friendship, and community.

After a fifteen-year absence, Christian (Paul Schneider) returns home to rural New South Wales for the marriage of his father, Henry (Academy Award winner Geoffrey Rush), the wealthy owner of the local mill that's been the economic bedrock of the community for generations. Christian gets reacquainted with his old friend Oliver (Ewen Leslie) and finds himself drawn to Oliver's family, which includes wife Charlotte (Miranda Otto), daughter Hedvig (Odessa Young), and father-in-law Walter (Sam Neill). When Henry announces the imminent closure of the mill, it sends a quake through the community, particularly Oliver's family, and the subsequent fissures release bitter secrets.

Critic Reviews for The Daughter

... The Daughter, while sticking close in broad outline to Ibsen's 1884 masterpiece, moves with a fluid grace that's wholly cinematic...

As any kind of introduction to Ibsen, this film is more a turnoff than a turn-on.

Made with taste, skill and discretion, "The Daughter" demonstrates both the staying power of classic material and the risks inherent in bringing it up to date.

While the acting draws us into the story, it plays like a daytime soap opera with really good actors and Australian accents.

The Daughter offers a good but sadly wasted cast, obscured in the eye-rubbing mist of a foggy Down Under countryside and struggling to rise above the sludge of a basic soap opera with literary pretensions.

The off-kilter handheld camerawork frequently chases after the figures as they move about. But there is no disguising that there's much more talk than action in The Daughter.

A gem, an emotionally affecting film that transcends melodrama to cut to the core of how people react and regret in the face of fidelity and betrayal.

Beautiful and powerful, The Daughter occasionally veers towards the melodramatic - but who cares when every element is this good?

Nick Evan-Cook
One Room With A View

Strong performances ramp up a constant high level of intensity which could perhaps have benefited from more contrast.

Things start bad and get worse.

Beautifully shot on rural Australia, capturing both the wild beauty of the countryside and the desolation of the failing economy, the film betrays no evidence of its stage origins...

Audience Reviews for The Daughter

I wanted to see this one at the cinema, so I was excited when the library got the DVD in. What can I say. Well acted, well made. Horrible ending. I think this is a movie that should have tied up a bit better at the end. Not saying it should have a happy ending necessarily,but I would have preferred for it to show one one way or the other. I felt most sorry for Hedvig, the teenage daughter, the boyfriend and that ending. Argh.