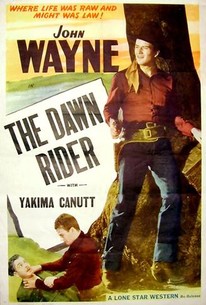 One of the last of John Wayne's "Lone Star" westerns, The Dawn Rider casts "the Duke" as two-fisted frontiersman John Mason. Searching for the dirty rats who murdered his father, Mason pauses long enough to romance pretty Alice (Marion Burns), thereby earning the enmity of his former buddy Ben (Reed Howes). Eventually our hero catches up with the villains, only to discover that their ringleader is Alice's own brother Rudd (Denny Meadows). On the verge of being done in by the crooks, Mason is rescued by his "friendly enemy" Ben, who'd previously sought revenge by loading Mason's gun with blanks. And they managed to squeeze all of this into 53 minutes!

Critic Reviews for The Dawn Rider

There are no critic reviews yet for The Dawn Rider. Keep checking Rotten Tomatoes for updates!

Audience Reviews for The Dawn Rider

Another entry from the Lone Star series, and in this one a young John Wayne very simply goes after the dirty skunk who kilt his paw. Plot development consists of the murdering skunk being the brother of the girl he's sweet on. Still good to see the young Duke before he became an icon.

A Very Early (1935) John Wayne Film. It would be hard to give any film prior to 1940 more then two stars. It seems that the westerns before 1940 lacked any kind of luster at all. But the Duke is the Duke, and it was fun to see his early actions appear in later films. In this one he has a hat that would cover a 2 year old. Also not that during the movie that hat changes from white to black. In this film the Duke rides into town and within 3 seconds he's in trouble, in the end his best buddy gets shot and he runs off with his girl, DUKE what?s up with that???? My copy was from the Mill Creek Western Legends 50 pack. Thanks Mill Creek keep up the good work. If you get a chance to buy these 50 packs from Mill Creek they are well worth the investment. But only 2 stars, only John Wayne Fans and Collectors should thrash out the greenbacks.