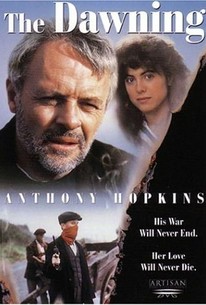 A young woman in her late teens is caught up in the political unrest of Southern Ireland in the 1920s in this drama that features an excellent cast. Nancy (Rebecca Pidgeon) befriends the pistol packing stranger she dubs Cassius (Anthony Hopkins) while he hides in a beach hut. He talks the naive Nancy into delivering a message to Dublin. There she meets Joe Mulhare (Mark O'Regan) and befriends the recipient of the message. Only when she witnesses the shooting deaths of 12 British officers does she realize the content of the lethal message. After the shootings, Nancy rushes to try and warn Cassius about the military police who are closing in on him. Trevor Howard is the old army officer and grandfather in his last screen role, with Jean Simmons as Aunt Mary. Watch for Hugh Grant as Harry, the stuffed shirt on whom Nancy has a huge crush. ~ Dan Pavlides, Rovi

Charmian May
as Celia Brabazon

Critic Reviews for The Dawning

Decorous direction and a stately pace render it indistinguishable from all those other films where sweet gels in pretty frocks take tea in the garden.

Audience Reviews for The Dawning

Adequate drama of a girl's emerging sense of the greater world beyond her own. Full of acting greats, unfortunately none of their roles are fully fleshed out, a real shame is that Jean Simmons and Anthony Hopkins share no scenes. A bit too leisurely paced to be really involving.