The Day of the Triffids1963 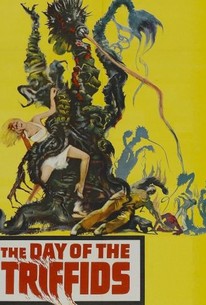 The Day of the Triffids Photos

Adapted from the novel by John Wyndham, this intelligent British monster movie begins with a meteor shower so intensely bright that it blinds the majority of the world's population, rendering them vulnerable to attack from hordes of carnivorous plants known as "Triffidus Celestus" grown from meteor-borne spores. As the plant-monsters continue to multiply and seek human prey, the remaining sighted people join forces to combat the veggie invaders. One such survivor, an American seaman (Howard Keel) whose eyes were bandaged during the meteorite impact, battles his way through the Triffid ranks. Meanwhile, a couple (Kieron Moore and Janette Scott are trapped in a lighthouse. Good production values make this low-budget effort look more expensive than it probably was; the uncredited assistance of Freddie Francis -- who directed several scenes with a second unit -- also helps.

News & Interviews for The Day of the Triffids

View All The Day of the Triffids News

Critic Reviews for The Day of the Triffids

As an old-fashioned plot picture unhampered by artistic pretensions, The Day of the Triffids is above par for the course.

A sci-fi thriller (1963) that sticks in the mind, thanks to deft pacing and a vividly paranoid premise.

Although riddled with script inconsistencies and irregularities, it is a more-than-adequate film of its genre.

Sometimes unintentionally funny, and it could have done without the customary moralising.

The book is a deserved classic, but this film loses most of the tension and all of the terror in the transition.

It's a good siege narrative, with uneven but sometimes very effective effects.

Always interesting, but bogged down by lengthy romantic interludes, the film is thought-provoking and scary at times.

The plants are marchin'! Hero Keel then overwaters them.

Audience Reviews for The Day of the Triffids

Although greatly ballyhooed the work is finally only a so-so effort, plants from space reminding us to certainly always finish yer salad. In the meantime I got the feeling that Howard Keel was the only Hollywood that could be got ... and that they shoulda passed on him and picked some local talent, as lifeless a performance as ever seen given. What's he doing in a sci-fi anyway? Here is a work dying, crying, to be repackaged, re-done.

well intentioned with a decent cast, this movie is a snoozefest...simply drags and what action there is consists of plant-like creatures inching along a mostly blind population. For insomniacs, suggested viewing is fifteen minutes twice nightly..

28 Days Later borrows heavily from the structure of this...only instead of zombies...their man eating plants...sweet

The Day of the Triffids Quotes