The Day the Earth Caught Fire1962 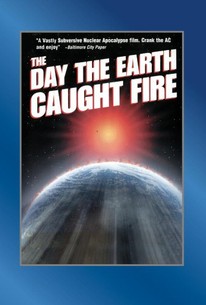 Despite its come-on title, The Day the Earth Caught Fire is an intelligent, disturbing piece of speculative fiction. Through the eyes of British reporter Peter Stenning (Edward Judd), we learn that both the U.S. and the U.S.S.R. have simultaneously set off nuclear explosions to test their efficiency. The twin blasts have caused the Earth to go off its axis. The result is a disastrous upheaval in the balance of nature; floods and fires being the principal plagues. With the end of the world staring everyone in the face, chaos reigns. The only hope lies in another massive nuclear explosion, which will hopefully rebalance the Earth. The film ends ambiguously, with viewers allowed to decide for themselves whether or not the world has been saved. In the original prints of The Day the Earth Caught Fire, the opening and closing reels were tinted yellow, representing the scorching heat beating down on the frightened populace.

Gene Anderson
as May

Critic Reviews for The Day the Earth Caught Fire

uncommonly intelligent in its treatment of a truly horrific doomsday scenario

End-of-the-world sagas are a dime-a-dozen, but here's one that's worth at least a few bills.

It may be fantastic in theme but it's journalistic in form and this makes it easy to accept.

A compelling science-fiction opus from Britain - less hypnotic, perhaps, than last year's Village of the Damned but superior to most of its competitors.

One is never quite sure how seriously one is expected to take this examination of newspaper ethics in time of crisis: the shot of the two headlines is certainly ironic, but the final narration is so noble and portentous that its effect is dissipated.

The disaster genre is not generally known for its insights into characters or its clever dialogue, but The Day the Earth Caught Fire is an admirable exception.

The Day the Moviewatcher Nodded Off

Audience Reviews for The Day the Earth Caught Fire

Imagine if Roland Emmerich made a film about journalism, only this is better than that would be.

This movie has an excellent plot, but doesn't have a sufficient amount of excitement or good actors. I liked it for the most part, but I wasn't sure about the ending. Overall, it could have been better.

A great movie..interesting story and solid acting..WHAT SETS THIS MOVIE APART IS THE PACING..I HAVE NEVER SEEN A MOVIE MOVE QUICKER..VERY COOL CONCEPT!