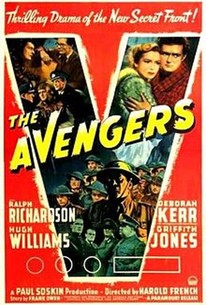 Also known as The Avengers, the British The Day Will Dawn is set in Norway at the outbreak of WW2. British foreign correspondent Lockwood (Ralph Richardson), forced out of Norway by the Nazi invasion, returns to the occupied Scandanavian country at the request of the War Office. Lockwood's assignment is to guide the RAF to a heavily camouflaged German U-boat base for sabotage purposes. With the help of patriotic Norwegian seaman Alstad (Finlay Currie), Lockwood completes his mission, only to be arrested as a spy and sentenced to be shot. The final portions of the film detail our hero's attempt to escape back to England with Alstad's daughter Kari (Deborah Kerr), with whom he has fallen in love. The intricately crafted screenplay is attributed to three of Britain's finest scriveners, Terence Rattigan, Anatole de Grunewald and Patrick Kirwen-and one suspects that there were even more talented hands involved in this thrill-packed wartime adevnture.

Critic Reviews for The Day Will Dawn

There are no critic reviews yet for The Day Will Dawn. Keep checking Rotten Tomatoes for updates!

There are no featured reviews for The Day Will Dawn at this time.

The Day Will Dawn Quotes