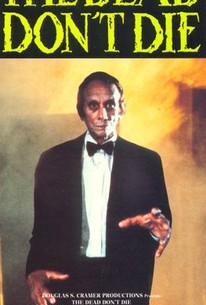 This interesting made-for-TV period gangster-horror piece -- written by Psycho author Robert Bloch -- stars George Hamilton as a military man in 1930s Chicago who pounds the pavement in search of answers after his brother's wrongful execution. His investigations plunge him into a dark world even more sinister than the gangland circles he is forced to penetrate, leading him to the domain of a diabolical scientist, Varek (Ray Milland), who is plotting to seize control of the entire city with his army of walking dead. Directed by horror veteran Curtis Harrington, this plays very much like a '30s pulp novel come to life with plenty of menacing noir atmosphere, creepy monsters, and some well-mounted shocks. The Dead Don't Die is also enhanced by good uniform performances and the presence of the undeniably spooky Reggie Nalder.

In the end, it is just a not-very-funny comedy horror movie with a big name cast - if you can recognize them.

If given more to work with Harrington could have come up with a possible cult classic.

There are no featured audience reviews yet. Click the link below to see what others say about The Dead Don't Die!