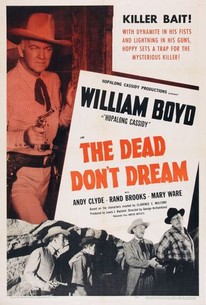 The Last Chance Inn, the main locality in this latter-day Hopalong Cassidy Western, certainly lives up to its name. A prospector has mysteriously disappeared after spending a night there and now Lucky Jenkins' (Rand Brooks) prospective "uncle-in-law," another guest, has vanished as well. Hopalong Cassidy (William Boyd) locates the missing man's body in a mine but when he returns with the sheriff, the dead man has performed yet another disappearing act. Just before retiring, in the same room previously occupied by the victims, Sheriff Thompson (Forbes Murray) reveals the name of his prime suspect: Larry Potter (Bob Gabriel), the outlaw brother of the inn's wheelchair-bound proprietor (John Parrish). But will the sheriff survive the night or disappear just like the previous occupants? Like so many of the Hopalong Cassidy Westerns, the oddly titled Dead Men Don't Dream was filmed on location at Lone Pine, CA. Leading lady Mary Tucker had previously acted under the moniker of Mary Ware.

Don Haggerty
as Deputy
View All

There are no critic reviews yet for The Dead Don't Dream. Keep checking Rotten Tomatoes for updates!

There are no featured reviews for The Dead Don't Dream at this time.