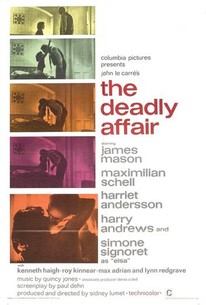 John LeCarre's Call for the Dead was the basis for this gloomy, complex spy story. James Mason plays a British secret agent puzzled by the sudden suicide of Foreign Office higher-up Robert Flemyng. Mason had worked on Flemyng's security clearance himself, and can't fathom what personality quirk he might have missed. The agent suspects that the dead man's wife (Simone Signoret), a concentration camp survivor, may hold the answer to Flemyng's despair, but the Foreign Office wants Mason to drop the case. Mason hires retiring Inspector Harry Andrews to do some private detective work. What Mason and Andrews find out is more insidious than they've imagined; worse, Mason is saddled with a new dilemma--his wife (Harriet Andersson) has been unfaithful with a colleague (Maximillian Schell). ~ Hal Erickson, Rovi

Petra Markham
as Daughter at Theater

Leslie Sands
as Inspector
View All

Critic Reviews for The Deadly Affair

As a spy thriller its intrigue dissolves into mist and the puzzle barely escapes the predictable. [Full review in Spanish]

Audience Reviews for The Deadly Affair

Another why-haven't-I-heard-of-this Lumet film. A solid spy thriller, doesn't break to much ground but once again shows that Lumet can tell a great story. After this and the Hill, Harry Andrews is becoming a new favorite actor. Oh yeah, a fantastic 60's jazz score by Quincy Jones.