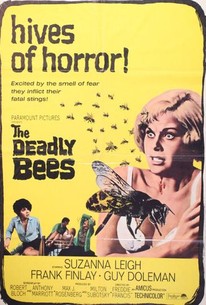 Noted British horror director Freddie Francis and author Robert Bloch, who wrote Psycho, combined their talents for this tale of terror. Pop singer Vicki Robbins (Suzanna Leigh) collapses from exhaustion and takes a vacation on a small resort island. She soon meets Mr. Hargrove (Guy Doleman), a difficult man with a failing marriage who owns the resort and keeps bees as a hobby. Charming Manfred (Frank Finlay), who also lives on the island, keeps bees as well, and he soon strikes up a friendship with Vicki. However, when first a dog and then Hargrove's wife are killed by bee stings, Vicki discovers that someone on the island is breeding a strain of killer bees, and she has to find out who is responsible and what can be done before they kill again. Keep an eye peeled for a short appearance by the British beat combo The Birds, whose guitarist, Ron Wood, would later become a star playing with The Faces (featuring Rod Stewart) and The Rolling Stones.

Alister Williamson
as Inspector
View All

Critic Reviews for The Deadly Bees

It's always doomed to be a very little, very silly film, but mostly the cast seems to know this and play it accordingly.

The special effects surrounding the bee attacks are poor, and the climactic twist shouldn't fool anyone over the age of 12.

Audience Reviews for The Deadly Bees

The combination of bizarre characters in a more bizarre setting created a pleasantly unnerving atmosphere. I absolutely loved the way the flying swarms were done.