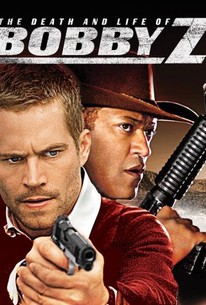 The Death and Life of Bobby Z Photos

Ex-Marine and convicted criminal Tim Kearney has been marked for death by a murderous biker gang, and now in order to cheat death he will assume the role of a powerful, recently deceased drug lord in this pulsating crime thriller starring Paul Walker and Laurence Fishburne. When Kearney (Walker) copped a plea with a scheming DEA agent (Fishburne) to impersonate surfing drug lord Bobby Z, his back was against a wall. Now, as the former convict convinces everyone including Bobby Z's girlfriend (Olivia Wilde) that he is in fact the man he claims to be, the drug dealer's old enemies turn up ready to settle some old scores. As the bullets begin to fly, the only choice Kearney has is to run for his life. Hunted from both sides of the law, Kearney attempts to protect the real Bobby Z's son despite the fact that his flight may find him missing out on some tidy illegal profits. ~ Jason Buchanan, Rovi

Critic Reviews for The Death and Life of Bobby Z

Pic overall has the feel of something tossed off to pass time and pay bills between more prestigious gigs.

...ultimately manages to overcome its myriad of deficiencies to become a surprisingly entertaining little actioner...

There's a reason this went straight to DVD, folks

Filled with head scratchingly dumb twists and cornball dialogue, this is not exactly a brilliant film. Yet it's got a slick look and at least a few passable action scenes.

Audience Reviews for The Death and Life of Bobby Z

I think I'm being generous, but come on this was just TERRIBLE.

To live a life of his own, he has to die first. Very good film! To tell you the truth I didn't know what to expect from this movie but I was gladly rewarded. Olivia Wilde wow, such an amazing hot woman, she drives me crazy and acts pretty good, reminds me of younger version of Julia Roberts, she has a great future ahead of her. The story was excellent and very interesting. Good ending! Tim Kearney is a loser. He's already in prison for the fourth time because of a criminal offence. There he's offered a deal with the DEA, which would involve his impersonating a legendary drug dealer, Bobby Z. Tim is told that the real Bobby Z has recently died of a heart attack in an embassy in Thailand, shortly after getting out of prison there. The plan that had been in operation at the time of Bobby's death was for him to be exchanged for a DEA agent that was being held by a Mexican drug cartel. The Feds explain to Tim that if he agrees to go along with this "transfer," he will be free to escape south of the border once the DEA agent is safely back on the American side.

Not bad, not great. Paul Walker may get a lot of razz for his acting, but I will take his acting any day over Keanu Reeves. The actor I was really disappointed in was Laurence Fishburne...he totally could have been left out of this movie. Overall, the movie does a good job at keeping action lovers interested, but there definitely was something missing....a decent plot. This movie had potential, but I feel the director did a lousy job and produced a mediocre film.

Ordinary crime actioner is a decent enough time waster as long as you don't have expectations of anything special. Paul Walker, a very handsome but frequently wooden actor, is better than usual but the film probably would have been better had he and Jason Lewis, a much better performer, switched roles.

The Death and Life of Bobby Z Quotes