The Death of Superman / Reign of the Supermen Double Feature (2019) 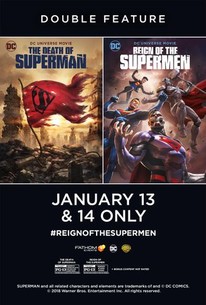 This action-packed event will include two features, audiences will first see The Death of Superman followed by the brand-new release of the sequel Reign of the Supermen for a gripping conclusion to The Death of Superman Saga. Reign of the Supermen -- It's been months since the unfathomable death of Superman, and the world is still shaken when four Super Heroes arrive in Metropolis, all battling to be the reincarnation of the Man of Steel. Even Metropolis isn't big enough for these brawlers, it's only a matter of time until dark forces make their moves from the shadows... The Death of Superman -- An asteroid hurtles through our atmosphere and with it arrives an unstoppable force known only as Doomsday. With innocent lives threatened and Metropolis under attack, the Justice League rally to meet this otherworldly menace. But when the dust settles, only an epic showdown between Superman and Doomsday can decide the fate of Metropolis and ultimately, planet Earth!

Both The Death Of Superman and Reign Of The Supermen are occasionally fun, but inessential entries in the animated DC canon, bringing nothing new to a pretty uninspiring story.

After the operatic grandiosity of the live-action movies, this street-level crimefighting is a nostalgic treat.

It's an adaptation that should please the fans and is arguably one of the best Superman movies since Richard Donner was fired, but it's lack of focus won't win too many over.

Reign of Supermen is a worthy follow-up to the superior The Death of Superman. Good in action, but lacking in emotion. [Full review in Spanish]

Animated sequel with frequent violence and a complex plot.

It's a solid piece of storytelling, inspired by a beloved chapter in the Man of Steel's comics history, and it captures the right mood for the story in a tight little package.

As epic of a story as it is, it also whets the appetite for smaller-scale, Superman-specific adventures.

The DC Universe line of animated films does it again with Reign of the Supermen, a worthy followup to The Death of Superman that finally adapts the classic storyline featuring Superboy, Steel and others.

Eric Joseph
We Got This Covered

Most importantly it's got a wonderful understanding about the legend of Superman and what an icon like him can mean, even after death.

Reign of the Supermen continues DC Animation's streak of solid entries as it delivers on an action packed film that will satisfy fans of the iconic story.

Here, the action is electric, the narrative constantly engaging, and the performances hitting the perfect beats for what is needed.

Reign of the Supermen is an improvement over its predecessor, but it still lacks emotional punch.

The voice cast is solid, and Reign of the Supermen works well as a sequel to last year's The Death of Superman, but it is not one of the various DC Animated universes' truly great entries. At least it wasn't another re-do of a story they've already done.

The Death of Superman / Reign of the Supermen Double Feature Quotes