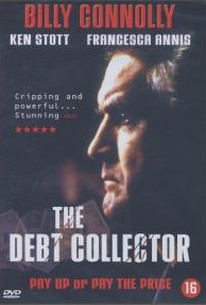 The first feature of Anthony Neilson, The Debt Collector is a dark contemporary thriller set in Edinburgh. The protagonist, Nick Dryden, has just been released from prison after serving 16 years for murder. In his youth, he was Edinburgh's most notorious and violent criminal, but his rehabilitation has worked wonders. Now he is a free man, married to a successful journalist and admired in the art world for his strikingly disturbing sculptures. But for Gary Keltie, the policeman who arrested him, life has been different. Depressed by the futility of his job and alone in the world except for his aging mother, he resents Dryden's new-found success and vows to sabotage it. There is one more person who is also obsessed by Dryden: the seriously disturbed adolescent gangster Flipper, although his reasons are not hatred but hero worship. The three men are on a collision course in this modern Scottish myth which exposes the extremes of human nature. ~ Gönül Dönmez-Colin, Rovi

Critic Reviews for The Debt Collector

There are no critic reviews yet for The Debt Collector. Keep checking Rotten Tomatoes for updates!

Audience Reviews for The Debt Collector