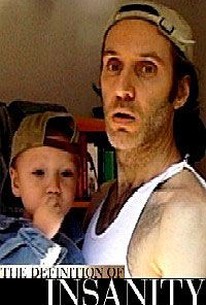 The Definition of Insanity Photos

A man has to decide if he's determined or just kidding himself as he continues to chase his dream of becoming an actor in this mockumentary comedy. Robert (Robert Margolis) is an aspiring actor in his mid-thirties who has been aspiring a bit long for the patience of his wife (Kelli Barnett) and his parents. While Robert is convinced he has talent and that his big break is waiting just around the corner, in the meantime he struggles to put food on the table for his wife and son by taking whatever acting work he can get and selling dog food over the phone. Robert's parents have been giving him extra money for years, but now they've decided it's time he started standing on his own two feet and have cut him off; Robert's wife also believes it's time he threw in the towel and got a "real" job, pursuing acting as a hobby rather than a career. As a documentary film crew follows Robert while he goes to auditions and looks for work, he begins to wonder if he's been making a mistake in following his art for so long...or if perhaps he's a bit crazy for not giving up on his dream. Robert Margolis both starred in and co-directed The Definition of Insanity, and his performance earned him Best Actor honors at the 2005 Brooklyn Film Festival.

Peter Bogdanovich
as Himself

John Greiner
as The Playwright

Michaël Gentile
as Man from the Gas Company

Carol Weiss
as Carol
View All

Critic Reviews for The Definition of Insanity

ly won't jump-start Robert Margolis' acting career, but it might get him closer to that status of working actor, just as he wished for in the film

A movie, candid and gently self-deprecating, about the people we rely on never to achieve fame and success.

I don't know how autobiographical this film is, but one can see Mr. Margolis, during a dark night of the soul, deciding to take matters into his own hands and making a film about his travails.

There are no featured reviews for The Definition of Insanity at this time.

The Definition of Insanity Quotes