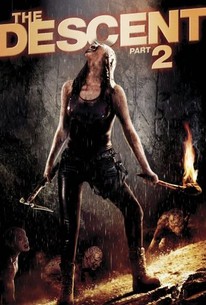 Critics Consensus: The Descent 2 goes spelunking for its predecessors' unnerving power but never digs beyond surface chills, although this efficient splatterfest contains enough nasty set pieces to sate the gore-prone.

Critics Consensus: The Descent 2 goes spelunking for its predecessors' unnerving power but never digs beyond surface chills, although this efficient splatterfest contains enough nasty set pieces to sate the gore-prone.

Critic Consensus: The Descent 2 goes spelunking for its predecessors' unnerving power but never digs beyond surface chills, although this efficient splatterfest contains enough nasty set pieces to sate the gore-prone.

The Descent editor Jon Harris makes the leap to the director's chair in this sequel to Neil Marshall's claustrophobic 2005 creature flick. Sarah Carter (Shauna MacDonald) has managed to escape from the Appalachian cave system where all of her friends were killed by "crawlers" -- primordial humanoids who have adapted to living in the subterranean darkness. In hopes that some of the spelunkers may have survived, Sheriff Redmond Vaines rounds up his deputies for a rescue mission, and decides to take Sarah along as a guide. At first Sarah has no memory of the horrors that wait below, but the further the team pushes into the cave, the more vivid her flashbacks become until the reality of the situation sinks in. Now, the rescue crew is being hunted from the shadows by a whole new clan of crawlers that are even more vicious and terrifying than their predecessors. Sarah was lucky to make it out of the caves alive the first time -- will that luck carry over into her second descent, or is she doomed to die while dreaming of escaping into the sunlight?

Critic Reviews for The Descent 2

An uninspired retread of a horror classic, this tries hard to justify its existence... and fails.

The first-time director Jon Harris recreates the sense of airless, claustrophobic panic that worked so effectively the first time around and cranks up the yuck factor exponentially.

It's efficient, and workmanlike enough, but the spark of inspiration that won fans for the first film seems to me pretty much gone.

The last half-hour is a tense team scramble to get out, and stay out, but the best move in this above-par shocker is digging right back into the claustrophobic emotional traumas which made Part 1 so thrilling.

At one point they even clamber over the corpses of the original film's victims to get to safety. It's not, on reflection, a bad metaphor for the entire enterprise.

It may not be as meticulously crafted or as gritty as its predecessor... [but] there's enough edge of the seat shocks and grisly set-pieces - not to mention satisfying cross-overs from the original - to keep genre fans happy.

Appreciate the bonus 90 minutes you get to spend down in the caves with these terrifying monsters.

While cave-killings were engaging for an hour and a half the first movie, this time around I grew bored by about the hour mark.

All in all, serviceable, if unremarkable extras - befitting the film they come from.

Audience Reviews for The Descent 2

"Well, we've lost 5 women down a hole here in the Appalachias. Only one's returned, covered from head to toe in somebody else's blood, and she's got no memory. My plan: we clean her up and get her to lead another team down the same hole, ASAP, fresh blood if you will, and we look for the rest. Who's with me?" People wandering around in dark underground caves inhabited by mutant cave ghoulies and oops, their flashlight batteries go out! Wonder what happens next? Same genre, more fun.

[img]http://images.rottentomatoes.com/images/user/icons/icon13.gif[/img] As a gleefully gory and totally nuts and bolts horror flick, Descent 2 is everything that it wants to be. But that's less than I can say for the fans of Neil Marshall's jaw dropping, heartbreaking original. Now i'm one of them, I am in love with The Descent. I still think it's one of the ultimate horror films of the 21st century if not a great example of pure character emotions manifested by brutal violence on screen. The sequel however is expectedly dull apart from the final 30 minutes in which it practices what every other horror flick ends up undertaking. Crank the volume up and splatter blood in our faces. The original film did a lot more than that. It made us endure claustrophobia which has only been done cinematically a small handful of times before. This time the surprise of the first one has dissapeared and the nail biting silence and enigmatical horror is therein replaced with gory set pieces and a larger appearance of crawling creatures than the last film. It is less imaginative in plotting and weaker directed than it's predecessor with one major difference which eventually counted for little change in the story anyway. The most unforgivable trait however is the weak, uninteresting group of characters which in the original were much more fleshed out, likable and much more vulnerable. The way they were defenseless made the original work. The Descent 2 fails in this sense. It's definitely not the worst sequel in the world of horror but I would never watch it again. The problem is not that it's extraordinarily free of merit, which it isn't. It's the lack of justification for it's existence that bothers me. It adds nothing to the legacy of the first one and simply deserves to be forgotten by true fans. If you're someoene who never saw the first one and the various shots that it boasted which inspired such great awe, you'll see more in this follow up than the rest of us should. It doesn't help at all that it features a less than radical conclusion to the overwhelming story of hope, suffering and regret which was it's forerunner.

When it comes to sequels to truly original films this here does a lot of things right. It starts right where the first one ended and picks up all the loose threats, including some you considered tightly bound. By using the same soundtrack, you feel as if you are watching a story that continues, not an unnecessary add on. You gotta give the creators credit for that. This also entails a problem, of course. The film has little to add we didn't already see (better and scarier) in the first, but tries to top in the gore department instead. That goes a little far at times. The original was also smart enough to show as little of the creatures as possible, with as little lighting as absolutely necessary. Neither is the case here, sadly. That doesn't mean that the film fails. It is highly entertaining, sometimes even exciting and has quite a huge surprise for fans of the original, which was no less than the best scary film of the last decade. It even has a truly evil ending without copying the first. Not bad at all, even if a bit repetitive at times.