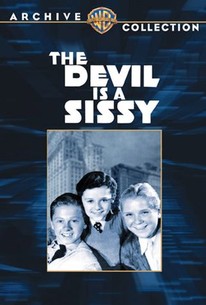 The Devil Is a Sissy Photos

The Devil Is a Sissy deserves an historical footnote as the only film to team three of the biggest child stars of the 1930s: Mickey Rooney, Jackie Cooper and Freddie Bartholomew. Bartholomew is a wealthy young English boy attending a New York "magnet" school, whose students are drawn from all walks of life. He is befriended by slum kid Rooney, son of a recently executed gangster, who in his own roughneck fashion helps Bartholomew to "assimilate" (Translation: He helps him to steal and evade the cops). Cooper is a middle-class gang leader with whom Rooney frequently clashes. Freddie attempts to fit in with his new chums by masterminding a break-in at a Park Avenue townhouse. None too soon, all three boys end up in juvenile court. ~ Hal Erickson, Rovi

Critic Reviews for The Devil Is a Sissy

It's one of those rare films about youngsters that youngsters themselves can look at without embarrassment. And it should be compulsory for adults.

Audience Reviews for The Devil Is a Sissy

Boy, to see three stellar child stars working together is a real treat. Jackie Cooper, Freddie Bartholomew, and Mickey Rooney have great chemistry, and there are many magical moments when the three interact here. I've always loved Mickey Rooney in the Andy Hardy films, and he and Judy Garland have done so many great films together. Here, he's on the rise. What a great actor. I'm surprised I never put him on my favorite actor list. He's going up there right now.

The Devil Is a Sissy Quotes