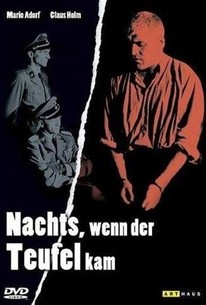 Writer/director Robert Siodmak based his German-filmed The Devil Strikes at Night on an actual case. Set during the last months of the Hitler regime, the film concerns a series of rapes and stranglings of young women. Gestapo officer Rossdorf (Hannes Messemer) and non-party member Axel Kersten (Claus Holm) investigate the trail of evidence. They discover that the criminal is Bruno Leudke, a mental defective (played by Mario Adorf). An open-and-shut case...except for the fact that Adorf is a loyal Nazi Party member! The dilemma now is to stem the crime spree without publicizing the embarrassing fact that "Aryan supremacy" is capable of yielding a monster like Adorf. Originally titled Nachts, Wenn der Teufel Kam, The Devil Strikes at Night has also been released as Nazi Terror at Night and Nights When the Devil Came. ~ Hal Erickson, Rovi

It crouches but -- alas -- never springs.

Werner Peters enjoyably essays another of his sweaty losers and the depiction of Bruno as a squalid dimwit makes a change from the Hannibal Lecter fantasy of the suave serial-killing mastermind.

This fascinating 1957 film, based on a true story, concerns the hunt for a serial killer by the Nazi regime.

Fascinating study of criminal justice in the crumbling Nazi empire of 1944.

If Siodmak was less a determinist than Lang, he was also less icy -- he views the fall-guy ordeal of piggy, pathetically lecherous officer Werner Peters with characteristic sympathy.

There are no featured reviews for The Devil Strikes at Night (Nachts, wenn der Teufel kam) at this time.