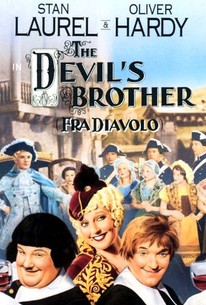 Based on an 1830 opera entitled "Fra Diavolo" by Daniel F. Auber, the parts of two bit bandits were built up for Laurel and Hardy, but this was still just a minor effort--a few good laughs but nothing spectacular that wasn't done better elsewhere. Released later as Bogus Bandits and The Virtuous Tramps, changing the title didn't improve the product. A classic impersonation film, it has the comic duo servants to a bandit who is impersonating a Marquis to get his hands on the jewels worn by the upper crust. Standard dual identity film is similar to The Scarlet Pimpernel. ~ Tana Hobart, Rovi

John Qualen
as Man Who Owned the Bull

Critic Reviews for The Devil's Brother

It is funny enough, and simple enough, to amuse you; more important, it is in the tradition of old-time movie comedy, of the stuff we used to get from Chaplin and Fairbanks.

Audience Reviews for The Devil's Brother

There are no featured audience reviews yet. Click the link below to see what others say about The Devil's Brother!