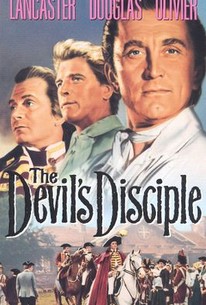 This film version of George Bernard Shaw's satirical take on the American Revolution had a troubled production history (with a director change in mid-production), but nevertheless boasts a cutting performance by Laurence Olivier. Shaw's tale depicts his version of how the British lost the American colonies: because of a stupid mistake at the War Office someone forgot to tell Lord North to join up with General "Gentleman" Johnny Burgoyne (Laurence Olivier) and smash the rebels. Burt Lancaster is on hand as the Rev. Anthony Anderson, a peace-loving parson who ends up becoming a belligerent firebrand of a rebel. Also is tow is Kirk Douglas as Dirk Dungeon, who, in typical Shawvian irony, starts out as a unrepentant, cowardly scamp and ends up as the personification of Christian virtues.

Critic Reviews for The Devil's Disciple

It's a work that the author disliked so much, he dismissed it.

Audience Reviews for The Devil's Disciple

The third of seven collaborations between screen icons Burt Lancaster and Kirk Douglas benefits greatly from the performance of co-star Sir Laurence Oliver. But, the film suffers from problems that led to the movie's director being replaced in the midst of production. The filmmakers had a difficult time handling the satire of George Bernard Shaw's play. I saw the movie before learning the director was replaced and remember feeling as if there were two distinct hands behind the filming. Nonetheless this film has some admirable qualities.