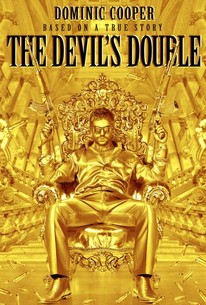 Critics Consensus: The Devil's Double has plenty of gangster spectacle and Dominic Cooper ably playing off his dual roles, but this crime epic struggles to balance the fun of bad behavior with the dead serious crimes of its subject.

Critics Consensus: The Devil's Double has plenty of gangster spectacle and Dominic Cooper ably playing off his dual roles, but this crime epic struggles to balance the fun of bad behavior with the dead serious crimes of its subject.

Critic Consensus: The Devil's Double has plenty of gangster spectacle and Dominic Cooper ably playing off his dual roles, but this crime epic struggles to balance the fun of bad behavior with the dead serious crimes of its subject.

Summoned from the frontline to Saddam Hussein's palace, Iraqi army lieutenant Latif Yahia (Dominic Cooper) is thrust into the highest echelons of the "royal family" when he's ordered to become the 'fiday' - or body double - to Saddam's son, the notorious "Black Prince" Uday Hussein (also Dominic Cooper), a reckless, sadistic party-boy with a rabid hunger for sex and brutality. With his and his family's lives at stake, Latif must surrender his former self forever as he learns to walk, talk and act like Uday. But nothing could have prepared him for the horror of the Black Prince's psychotic, drug-addled life of fast cars, easy women and impulsive violence. -- (C) Lionsgate

Andre Agius
as Kid on Crutches

News & Interviews for The Devil's Double

Critics Consensus: Cowboys and Aliens is All Mixed Up
Exclusive: RT Visits the Set of The Devil’s Double

View All The Devil's Double News

Critic Reviews for The Devil's Double

I'm not sure what it all adds up to, but The Devil's Double puts its hooks in you and keeps them there.

Equally as offensive as the movie's smorgasbord of smut and violence is the lingering whiff of colonial-era orientalism, a Western predilection for regarding Eastern cultures as innately idle, lascivious, irrational, and thus ripe for intervention.

The Devil's Double simply offers a trip through hell on a one-way track, like a spook-house ride at the amusement park meant to titillate and excite the senses and then deposit the rider/viewer safely on the other side in the full light of day.

A better film would undoubtedly have been a quieter, more reflective one, less tempted by Grand Guignol. But it is very watchable...

This isn't exactly a complex study of Iraqi history, but director Lee Tamahori punches it across, and the Stalinesque use of doubles in Iraq is interesting.

Cooper is terrific in his two roles, but he's much better than the film itself, which is as flashy and violent as the decadent world it depicts - and just as shallow.

[A] mercilessly long-winded film with little on its mind beyond cataloging Uday's depravity.

A truly satisfying resolution is slightly out of reach when there's less room to play fast and loose with accuracy, yet there's no denying that this was one historical footnote well worth exploiting.

A brave experiment that unfortunately fails within the first few minutes due to a combination of miscasting and all out crassness.

This rambunctious romp is not for the faint-hearted but it is packed with over-the-top lines to quote for weeks after.

This is an over-the-top gangster flick that starts with the volume turned up to 11 and stays that way. It's never boring, but revels in the bad behaviour it pretends to condemn, and is too much on one note to be much good.

Audience Reviews for The Devil's Double

A lazy and terribly-directed movie that depicts Uday Hussein as a ridiculous caricature in what is a redundant story devoid of any subtlety. Besides, Dominic Cooper is such a mediocre actor, unable to lend any sort of complexity to the two identical main characters.

Although a glimpse into the decadence of the Hussein regime this bears the serious flaw of being one note. And yes, that note is loud.

An Iraqi army conscript is forced to become the body double of Saddam Hussein's psychotic son and finds himself losing his identity as he drowns in a sea of depravity and murder. There have already been a slew of projects based on the Iraq war and The Devil's Double is an interesting film in that it shows the other side of the conflict, to some extent at least. Dominic Cooper makes a decent fist of playing both the pampered, debauched and sadistic member of the Iraqi elite and his moral, working class impersonator who is appalled by the behaviour of those who rule. Sort of a bizarre cross between such diverse stories as The Prisoner Of Zenda, The Last King Of Scotland and Scarface, the excesses and violence of The Devil's Double are counterpointed by the even more bizarre fact that it is actually a true story. I think it would have been better for the greater context of the life of ordinary Iraqis of the time but it still makes for a shocking and brutal journey through the looking glass into Saddam's world.

This film confers on the supposedly true story of Iraqi soldier Latif Yahia (Cooper), who was taken from the front lines in 1987 to be the body double of Saddam Hussein's son Uday Hussein. Though this story cannot be confirmed because body doubles are confidential and reputed by the Iraqi government, it does have all the makings of being true, what with the ill will that Hussein's subjects had towards him. The film really revolves around the disgusting actions of Uday Hussein, which have been documented, including his abduction and rape of young girls, his berserk murders of government officials, and his eventual assassination attempt. From Latif's perspective he is encased in the bureaucracy of the country, and has to do the bidding of the contemptuous heir to save his family from direct violence. Based on Uday's evil tirades against his own people and his brutish behavior as observed from countless witnesses, the events depicted did not affect me negatively, and didn't seem over the top or senseless. What bothers you as the viewer is the personality that Dominic Cooper dons in order to portray Uday Hussein. Hussein is definitely shown as being oafish with aplomb, which is again fine, but there's also this stupidity and frat boy edge to the role which makes it cartoonish at many times. This may be because of the opulence of his lifestyle, but most of the time it comes from his doddering appearance, which makes him seem mentally challenged more than malevolent. As Latif, Cooper does an outstanding job of playing the dispassionate stooge to Uday's war hungry son. The world of Iraq during the Gulf War is easily crafted, and the majesty of Hussein's world is well represented, but it simply reads as a smoke screen to the violence going on onscreen. There are some questionable performances, but at least it was intriguing to see into that world.