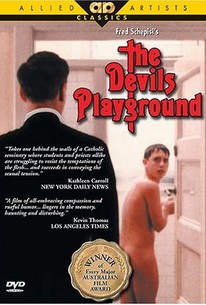 Fred Schepsi wrote and directed this tense melodrama which takes place at a Roman Catholic boarding school. The film deals with the charged emotional tensions of a group of pubescent boys, who find their sexual urges stifled by the school's oppressive atmosphere. Depicting the chaste lifestyle of the religious functionaries, the burgeoning sexual desires of the young men are bottled up until they are ready to explode. ~ Paul Brenner, Rovi

Jillian Archer
as Girls in Pub

Anne Phelan
as Girl in Pub

Critic Reviews for The Devil's Playground

Playground is such a completely and thoroughly realized piece of cinema that almost every scene and sequence in it compels admiration.

Audience Reviews for The Devil's Playground

There are no featured audience reviews yet. Click the link below to see what others say about The Devil's Playground!