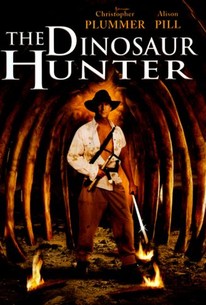 Two kids discover just how exciting science can be in this drama for the family. Julia (Alison Pill) is a young woman growing up in a farming community in Central Canada, which has been hit with an unseasonable drought. Spirits are low around Julia's household until she and her brother Daniel (Bill Switzer) meet Jack (Simon McCorkindale), a travelling archeologist who is looking for dinosaur bones. Jack's dream is to some day find an entire skeleton intact, and he teaches Julia and Daniel lessons about both the science and the excitement of looking for fossils. Just as Jack and his new friends begin making some important finds, along comes "Hump" Hinton (Christopher Plummer), a fellow dinosaur hunter who has long considered himself Jack's greatest rival and who is determined to steal Jack's bone samples for his own purposes. The Dinosaur Hunter was originally produced for WIC Premium, a Canadian pay-cable service.

Critic Reviews for The Dinosaur Hunter

There are no critic reviews yet for The Dinosaur Hunter. Keep checking Rotten Tomatoes for updates!

There are no featured reviews for The Dinosaur Hunter at this time.