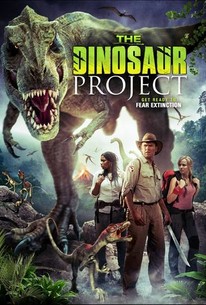 Dinosaur Project is a team of explorers searching for a mythical creature. When their helicopter is brought down by a flock of enormous birds they discover strange creatures which civilization has thought extinct for millions of years!

Critic Reviews for The Dinosaur Project

Too gory for my inner eight year-old, and my inner 12 year-old cringed throughout.

The dinosaurs do the business, but they are let down badly by the human element.

Director Sid Bennett is a CGI whizz and does a better job animating his dinosaurs (there are some terrific killer bat-like critters) than his actors.

It's British, it's kind of fun and, at barely 80 minutes, it doesn't outstay its welcome.

The Dinosaur Project, is exactly what you would expect from a found footage orientated, British film about dinosaurs... but that, unfortunately, is not a positive acknowledgement.

The CGI monsters are surprisingly convincing and children will identify with the intrepid 15-year-old lad who stows away on his dad's helicopter and turns up trumps by using his computer wizardry.

The effects are realistic but the acting isn't and the storytelling drags.

Reeks of a low budget and a poor script but has just enough charm to be worth a look - particularly if you have kids who like watching giant reptiles eating people.

Many people could learn from this film's achievements - and its mistakes.

The found-footage horror genre branches out into family-friendly territory with this modestly budgeted action-adventure thriller [in which the victims] are so sketchily characterised that you barely register their presence before they meet their demise.

Audience Reviews for The Dinosaur Project

What a fucking misleading poster, there's no fucking T-Rex in the movie. Sorry to spoil it, but don't look at this poster and expect to see a fucking T-Rex. I also didn't review the last two movies I saw (Era El Cielo and Love Clinic) because they're not available on here. With that said, on to the review. You know, outside of the Jurassic Park films, I've always found dinosaur films to be a little lame and dorky. I don't know why it is, but I've always felt that way. And I know that that's not exactly fair, to lump in all dinosaur films in existence into the same description, but that's just been my experience. And, as far as I can tell, there have also been no found footage film about dinosaurs. Well, none until this one at least. I can't quite understand why this film really existed in the first place. Like, why would you go out of your way to try and get this film produced? That perhaps sounds a little harsh, but I don't intend it that way. But it's just the fact that there's nothing to this movie, absolutely nothing. It's not an awful movie, don't get me wrong. For what, I'm sure, was a low-budget found footage movie, this is a competently made movie from a technical standpoint. It's got everything that people hate about the genre, but if we're being objective, this isn't a horrifyingly made movie. It's just not. But, outside of the fact that it had better CGi than I would expected for the dinosaurs, there's absolutely nothing to this movie. This group of explorers goes into the Congo to explore the investigate a cryptid that the locals call Mokele Mbembe, who is thought to be a dinosaur. On the way there, the group's helicopter is attacked by flying reptiles, which causes the chopper to crash in the jungle. So, basically, the story is about this group trying to find their way back to civilization so they can be rescued. And that might sound like it's not so bad, for those of you who haven't seen the movie. But I'll be straight up here, the movie does less than nothing with that. You have a group that, really, you should feel sympathy for. You should want them to get out of this situation, but there's not even that. The movie doesn't really know what it wants its story to be. Does it wanna be about a father and son repairing their broken relationship? Does it wanna be about a jealous partner, who feels the spotlight should have been his instead of the person who actually got it? Or is it just meant to be a stupid movie about dinosaurs doing shit? It definitely wasn't the latter. Because, while the movie is called The Dinosaur Project, they're not actually present that much. I mean, they're there for sure, but it's more about the humans instead of the dinosaurs. And this wouldn't be so much of a problem if they had one thing and one thing only. Can you guess what that is? I'm sure you can. Interesting characters. The film's characters are some of the blandest people you will ever meet. They have no personalities whatsoever. The one that does, the partner who feels he should have had the spotlight, ends up coming out of nowhere. I mean he does an interview early on in the film that shows that there's some tension there, but there's no tease of dissension any time during the trip to the jungle. He just becomes a dick, literally, out of nowhere. It would have been more satisfying if they had built it up throughout the movie up until that point so it, at least, wouldn't have felt out of place. But, and if you have a shitty memory, you don't even remember the interview at the beginning. It is what it is, but I just felt they shouldn't have even bothered with this. It just didn't work. Another thing is the fact that, realistically speaking, this isn't ever a horror movie. Nor is it really an action-adventure. I don't know what the fuck it actually is. This movie defies description and not in a good way, like Swiss Army Man or Save the Green Planet. Those films work because they mix and match so many different genres into one insane piece of art, that the fact that it defies description is a boon. This isn't the case for this movie. They don't attempt to be inventive or creative in any way, shape or form. So the fact that it lacks an actual identity is, really, disastrous for this movie and their hope of finding an audience. Dinosaurs fans won't like it because it doesn't feature many dinosaurs. Horror fans won't like it because there's very little actual horror. What does this movie want to be? Other than just a small drop in a wide ocean of found footage movies that fail to find much of an audience. I've seen worse, for sure, but there's nothing about this movie that I liked. The CGi for the dinosaurs was actually pretty good considering the budget, which I know was low, but that's about it. There was nothing else I got into. I cannot recommend this movie in the slightest.

What an absolute let down. The makers of this film should seriously feel ashamed of themselves. They fail to create an interesting narrative or make a believable found footage film. The Dinosaur Project follows a group of documentary filmmakers and explorers as they travel into deep dark Africa to investigate a reported dinosaur sighting. They soon find a whole society of dinosaurs roaming free. The film fails because it seems as though it wanted to have a conventional narrative, but chose the found footage genre to save some money. This leads to painful dialogue and the most obvious characters you could think of. They even try shoehorning in a typical villain, which makes no sense given the danger everybody is in. The film doesn't seem to care too much about sticking to its premise, as camera shots appear from anywhere and all the action is captured perfectly. We'll see somebody with a camera being filmed, and when it cuts to their perspective the person filming them has vanished. Is the main cameraman a Predator with a cloaking device, because I swear you manage to see him once. We also have magical sound, where even when characters are standing far away from the camera we can pick up what they are saying perfectly. This is very much a kids film, in that we have a 'cool' young protagonist who is an exceptionally useful tech whiz. He can even afford and operate devices the professional TV crew haven't even heard of. The film tries to be too good, when poor sound, lazy framing, and inconsistent lighting would have been a huge benefit. The dinosaurs do look fantastic though and all credit should be given to those behind these creatures. It's such a shame that the film surrounding the effects had to be so poor.

Even with Dinosaurs roaming around this "found-footage" film still manages to be an incredible bored. It's a letdown of epic proportion and it is by far one of the laziest "found-footage" film I have ever had the displeasure of watching. The Dinosaur Project has a very poor contrived plot filled with annoying characters you want to see get eaten, incoherent dialogue, no heart, and bad acting. The first of many problems is that it's "found-footage" spoiling what little suspense it had going for it. It's heavily contrived and lazy writing at it worst, just because a character son loves filming with a camera and just happens to be aboard the plane heading to island filled with Dinosaurs doesn't mean we'll buy that incredibly weak excuse for the filmmakers to be cheap. By far the Dinosaurs have the most mesmerizing dialogue in this movie and deliver some the movie best performances, that's right, the acting by our "stars" is so bad I had resort to giving the Dinosaurs acting praise. It gets worst, the movie builds up to the reveal of the African Loch Ness Monster and wow was it a complete letdown. This level of failure in storytelling is like a story I read about a man who paid his friend to have sex with his wife to her pregnant and failed over one hundred times. So how are these Dinosaurs you're probably wondering, look for yourself. [IMG]http://sphotos-b.xx.fbcdn.net/hphotos-ash3/579872_263728233744112_885680583_n.jpg[/IMG] Yes you have seen better special effects in 1993 Jurassic Park and with the technology today don't you think these creatures could look more realistic. Apparently not since the filmmakers obviously don't know how to write a decent plot let alone care about their special effects. If that wasn't bad enough this movie dares to have an actor impersonate Indiana Jones in a very poor way. Filmmakers, if you want to make a bad movie go ahead, just leave the Dinosaurs and Indiana Jones alone. I could really care less what these characters are going through with their incredibly contrive plot points and so will you, you'll hope that King Kong, Godzilla, or something to come kill these annoying character. I could also do without the Justin Bieber look-a-like which to be honest has be overdone by now and please stop whining about your dad not loving to the camera. Aside from seeing Dinosaurs it's really not worth your attention. The Dinosaur Project is a poor excuse in lazy in film-making with no effort shown in it. It's unfortunate that we get horrible movies like these which ruined the "found-footage" genre for everyone.