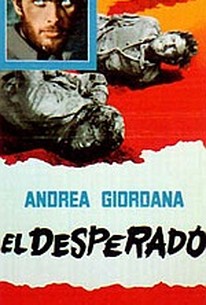 In this spaghetti western, set during the last days of the Civil War, an outlaw finds a dying Confederate officer. As the officer expires, he tells the outlaw about a cache of gold hidden in his blind father's home. The enterprising thief takes the dead man's clothes and tricks the father and his housekeeper into believing that he is the son. He is just about ready to begin looking for the gold when an outlaw gang comes to town and forces him to help them rob an army payroll wagon. He then tries to abscond with the loot. The bandits torture him, shoot him, and leave him for dead. Then they shoot the blind father. The hero gets better and gets grisly revenge upon the outlaws. He saves a special treat for the gang leader. First he uses mud to blind him. Then he puts a gun in his hand and kills him. ~ Sandra Brennan, Rovi

Andrea Giordana
as Steve
View All

There are no critic reviews yet for The Dirty Outlaws (El desperado). Keep checking Rotten Tomatoes for updates!

There are no featured reviews for The Dirty Outlaws (El desperado) at this time.