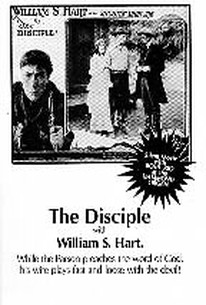 The Disciple represented actor-director William S. Hart's twenty-fifth cinematic effort for the year 1915. Cast against type, "two-gun" Hart portrays itinerant preacher Jim Houston, who rides the circuit in the Wild West accompanied by his wife and daughter. Arriving in a lawless town, Houston immediately crosses swords with town boss Hardy (Robert McKim) a Doc Holliday type who forsook the study of medicine to become a gambler. On the day that Houston opens his new church, Mrs. Houston runs off with Hardy. The outraged Houston turns his back on God and becomes a mountain hermit, dragging his daughter along. Later on, the child becomes gravely ill and calls out for her mother. Her piteous pleas softens the heart of the taciturn Houston, who prays to God for his daughter's recovery. This provides an ideal cue for Mrs. Houston's unexpected return -- which leads to an incredible DeMille-like finale, complete with a vision of Christ on Mt. Calvary and the superimposed subtitle "Father, forgive them, for they know not what they do."

Critic Reviews for The Disciple

There are no critic reviews yet for The Disciple. Keep checking Rotten Tomatoes for updates!

There are no featured reviews for The Disciple at this time.